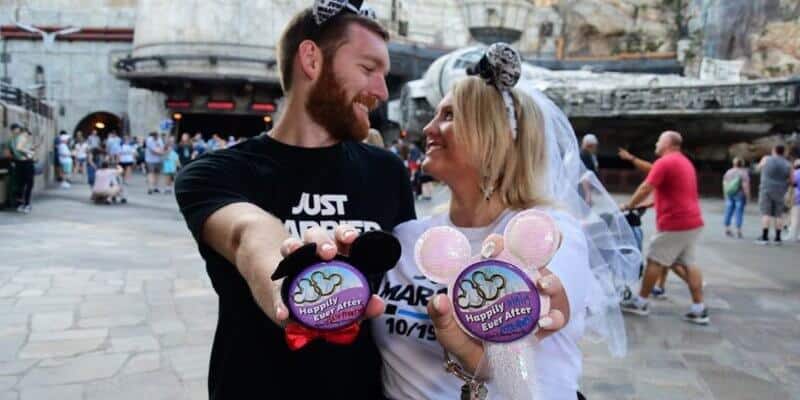 You may think you’re a huge Disney fan, but would you spend $35,000 on a Disney-themed wedding? This bride did — and it looks pretty epic.

A young couple got engaged at the Most Magical Place on Earth — Walt Disney World Resort — during Mickey’s Not So Scary Halloween Party, an event in which adults can dress in full costume. Kristen was dressed as none other than Cinderella (the princess whose castle is at the Magic Kingdom) and her then-boyfriend, Kenan, was dressed as Prince Charming. Kenan got down on one knee in front of Cinderella Castle, something Kristen had a suspicion he would do.

“I had a feeling that he would propose at Disney because he knew that was something I wanted as a little girl,” she said, according to The Sun. “I just didn’t know when. I was completely surprised when during the party in front of the castle while dressed as Prince Charming and Cinderella he proposed to me with a pillow made of a flower. On top of the flower was a glass slipper and tiara. He had said that his heart was like the glass slipper and I was the only one who could fill it. It was better than any proposal I could have ever dreamed of.”

And from then on, the engaged couple began planning their Happily Ever After. Though the couple didn’t get married at Disney World, Kristen did incorporate as many Disney references as she could when planning the magical event of a lifetime. She drew inspiration from Disney and Pixar’s Up, everybody’s favorite Mickey Mouse, and more. The couple’s rehearsal dinner was held at an Italian restaurant and had a Lady and the Tramp theme, and the wedding cake paid homage to a tale as old as time with Beauty and the Beast motifs.

The couple also had a “first look,” a moment in which photographers capture the bride and groom seeing each other for the first time before the ceremony.

“Our first look was Up themed,” Kristen said. “I came out with Mickey shaped balloons. Tied to the bottom of the balloons was an Up themed box with a grape soda pin. On the back of the pin it stated, ‘K&K 10/19/19’. I pinned the pin on him for the ceremony.”

She continued to describe even more of the Disney elements of their wedding: ““For the ceremony I had aisle signs with Disney love quotes as you walked down the aisle along with an aisle runner that had Lady and the Tramp on it. Kenan and the groomsman walked out to Some Day My Prince Will Come. My bridesmaids walked out to Can You Feel The Love Tonight by Elton John. I walked down to At Last I See The Light from Tangled. We did have a sand ceremony to which we poured sand into a Cinderella and Prince Charming sand ceremony box. Our Cocktail hour was Alice in Wonderland themed. For the reception, all of our bridal party came out to different Disney songs with props. The last song of the night was Happily Ever After from the Magic Kingdom fireworks.”

But that’s not all. Kristen and Kenan even learned the dance from the iconic ballroom scene in Beauty and the Beast and had a cocktail bar themed after the Snuggly Duckling from Tangled. Just when we thought the wedding couldn’t get any more Disney-themed, we found out that they added some Star Wars elements to their photos, as well. Take a look:

All in all, the couple spent around $35,000 on their wedding — but given all of the Disney elements involved, it would have been spectacular to even attend as a Disney fan! After the wedding, the two went on a honeymoon on Disney Cruise Line and to Walt Disney World Resort. We can’t think of a better way to celebrate!

“I’m happy now that I get to share my ideas and help other brides make their dream weddings come to life,” Kristen shared, like a true lover of Disney magic.

Want to read about even more Disney-themed weddings? Inside the Magic has covered so many! ! Read about the wedding with attraction-themed guest tables, a Christmas Eve wedding at Walt Disney World, and a Haunted Mansion-inspired Happily Ever After.

What would your dream Disney wedding look like? Let us know in the comments!