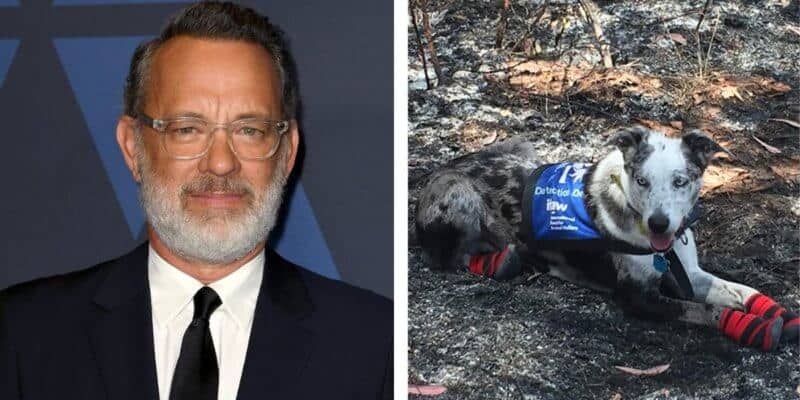 When Bear the Koala Detection Dog was first introduced into our world, we all fell in love instantly.

In case you don’t know who Bear is — He is a detection dog that was deployed to Australia. More specifically, he was sent to an area which was, unfortunately, hit by a bushfire.

Bear the Koala Detection Dog has been trained to search for any koalas who are still alive after this unfortunate brushfire and to help prevent them from being lost in the wreckage.

But don’t feel bad because you aren’t the only one who hasn’t heard of Bear. The one and only, Tom Hanks, also has never heard of Bear, but the minute he did, he automatically thought that this Detection Dog deserved stardom.

So how did this happen? Well, Twitter Movies decided to do a segment with Tom Hanks, almost like the famous ‘Mean Tweet’ segment that Jimmy Kimmel does with his guests, but this time, Hanks was to read nice Tweets in order to share positivity around social media.

Amongst these nice Tweets was one about Bear the Koala Detection Dog, in which Tom Hanks was absolutely blown away.

“This is Bear. He was abandoned as a puppy due to his OCD but quickly found a new life as a koala detection dog,” the Tweet read. “As wildfires devastate Australia’s east coast, Bear is doing his best to locate any injured or misplaced koalas. He’s their unexpected savior and our thirteenth 15/10.”

Hanks was almost taken back by the Tweet. “This is a Disney movie that must be made — the story of Bear, the koala detection dog,” Hanks said. “That’s adorable. I like Bear.”

Personally, I couldn’t agree more. Bear is absolutely adorable and the world instantly fell in love with him. If Disney were to do a movie about Bear the Koala Detection Dog, I know I would go see it.

It's a beautiful day in the neighborhood for some Nice Tweets, read by @tomhanks himself! pic.twitter.com/hwrLU5Vqu8

What do you think of Disney making a film about Bear the Koala Detection Dog? Would you go see it? Let us know in the comments.