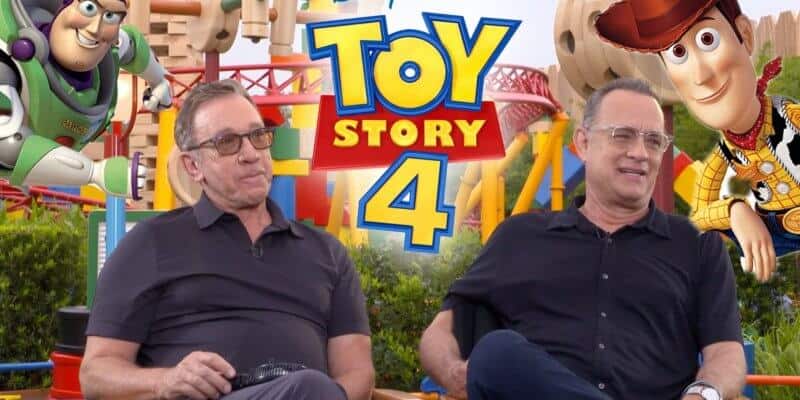 “Toy Story 4” is just about to leave theaters and the digital version is arriving soon! As we celebrate the film’s $1 billion-dollar success at the box-office we can’t help praise the two actors (toys) who started it all: Tim Allen and Tom Hanks.

Every Disney fan knows that Allen and Hanks have portrayed one of the strongest bonds between any two characters ever seen before on film (Woody and Buzz Lightyear). Of course, from a connection this impenetrable, one might wonder how they do it and what it’s been like for the TV and film legends over the past 25-years of the “Toy Story” films? Well, the two shared the ins and outs of their connection in a recent interview, spilling the details of their friendship in real life as well as on-screen.

In the interview, when asked about their friendship, Allen reveals their friendship on-screen and off-screen is not different at all, saying: “There’s no difference. Except I don’t have a spacesuit.” To which, Hanks commented: “If you joined us for one of the many lunches we’ve have where we just sit around and lose all sense of time and space as we’re sitting in a restaurant somewhere it is woody and buzz arguing and agreeing and laughing exactly as they do.”

Hanks went on to say that if Disney and Pixar followed the two in their everyday lives together, there’d probably be more films by now. “Unfortunately, we never get to record to gather. They should just bring microphones to our lunches and they’d have four or five ‘Toy Story’ movies right there,” said Hanks.

For those who haven’t gotten to see “Toy Story 4,” fear not as the film is still playing in theaters in select markets. However, if you can’t make it to your local movie house anytime soon, the film will also be coming to Digital in 4K Ultra HD, HD, and Movies Anywhere Oct. 1, and on 4K Ultra HD, Blu-ray, DVD Oct. 8.

Will you be getting “Toy Story 4” when it releases Digitally and on Blu-ray and 4k UHD in October? Let us know in the comments!

Comments Off on Tim Allen & Tom Hanks: Friendship beyond the silver screen