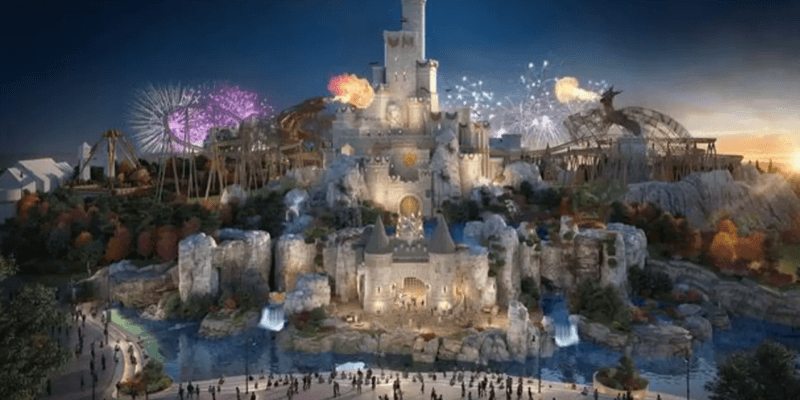 The London Resort took to Facebook with a construction update on the upcoming park! The social media post reads ‘Yesterday we announced our public consultation. That’s one more crucial step towards making The Kingdom, an immersive realm of “swords, sorcery, dragons and legend’, a reality.”

Yesterday we announced our public consultation. That's one more crucial step towards making The Kingdom, an immersive realm of “swords, sorcery, dragons and legend”, a reality.

When complete, it will be three times larger than any other park in the UK. Two theme parks and a resort water park will be set over 535 acres, the equivalent of 136 Wembley Stadiums. A bespoke entertainment district, including the provision of 3,500 hotel rooms, will be devoted to a full-suite of hospitality experiences. There will be something for every generation and food and drink for every taste.

But it’s the rides and the experiences which will take The London Resort to another level. Brands from across literature, television, music, film and entertainment, are being hand-picked to create unique experiences never previously imagined.

A new multi-billion British theme park is currently in the works and it has us filled with adrenaline!

A few years back Inside the Magic reported on Paramount Park, a 535-acre theme park resort planned for the UK and now we have even more news to share about the project as well as some changes that have come as well.

The upcoming London Resort is set to open in 5 years and has now finally revealed the layout as well as new images and the result is absolutely breathtaking.

Though this has no connection to The Disney Company, it is currently being called ‘the UK Disneyland‘ as it closely resembles something that Disney would do. So who exactly is behind this upcoming project? Well, BBC, ITV Studios, and Paramount Pictures!

This new Mega Theme Park will be made up of six islands, which are all spread across a 535-acre site. It will be located on the Swanscombe Peninsula near Dartford, Kent.

The six islands include:

Those who visit The London Resort will start their adventure through a grand plaza which will have a Las Vegas vibe. The grand plaza will then lead visitors through The High Street, which will include shops, restaurants, hotels, convention center and waterpark.

The Studios will be a place for visitors to watch as well as get further insight and details to their favorite blockbusters.

In The Woods, visitors will enter a new realm filled with enchanted characters and scenery from classic fairytales and bedtime stories.

If you are a fan of sorcery, then you will want to visit The Kingdom, which is filled with dragons and swords. It is described as “England will be portrayed as ‘a dark and ancient land, a place of threatening and imposing castles and mystical Arthurian legends’.”

The Isles is a land of giants and mythical beasts.

The Jungle is filled with ancient ruins and leafy treetops.

Starport is the final land and will tend to outer space lovers. Showcasing alien creatures and ‘future’ rides, Starport will transport guests into a ’23rd-century landing zone’.

When will The London Resort Open?

PY Gerbeau, chief executive of London Resort Company Holdings, said: “We are creating a first-class theme park. A destination that maximizes all the new, immersive and interactive technologies and experiences in the world. But we won’t just be creating a world-class leisure destination, it will also be one of the most sustainable theme parks on the planet.”

Gerbeau continued, “We have three guidelines we work to when it comes to developing attractions. Number one is innovation. We’re not here to copy what’s been done before even if it has been successful. Number two is relevance. We need to consider that the customers of today will not be the customers of 2024. And the third is flexibility. We need to create a park that can evolve and adapt easily.”

The London Resort is committed to green energy and will “aim to produce the lowest carbon footprint of any theme park in the world”.
This is currently a long-term plan and will eventually contain two parks — One is set to open in 2024 and the other will be coming in 2029.
Construction on The London Resort is set to start in 2021.

What do you think of this new ‘UK Disneyland’ theme park, The London Resort?