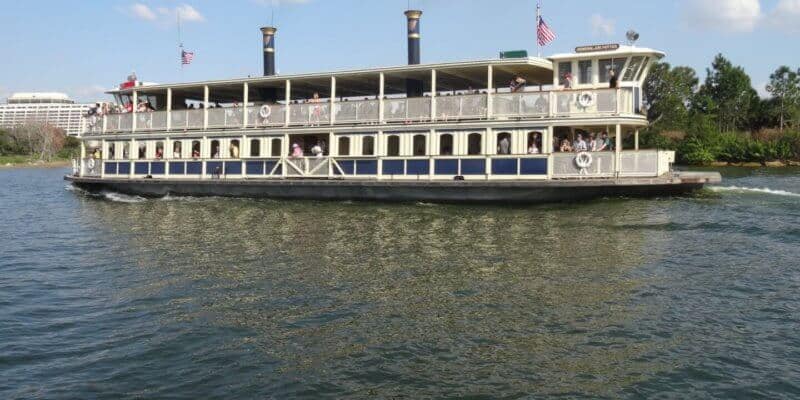 Ferry boat passenger B. Rosengrant was visiting the Magic Kingdom at Walt Disney World today, departing for the Ticket and Transportation Center when he witnessed a person from the upper deck of their ferry boat either fall or jump overboard into the Seven Seas Lagoon. The guest started to swim back towards the Magic Kingdom when slight chaos erupted. Guests and crew members alike alerted others yelling, “Man Overboard!” and the crew jumped into action to rescue the guest.

Rosengrant reports that it was extremely professional rescue operation, with searchlights and rapid sending of a smaller rescue boat out for the overboard guest. Other nearby guests were pulled aside for questioning as witnesses. It was reported that the guest’s bags were still onboard the Ferry boat. Police were on the scene after the Ferry boat came to the dock, with the entire incident taking around 15 minutes, Rosengrant tells Inside The Magic.  The woman was rescued and is safe with no reported injuries. The guest was alone with no company.

Additional confirmation was found on a Facebook post by  IThemePark, as they were also witnessing the incident on Seven Seas Lagoon. Disney World cast members seem to have handled this rescue extremely well with top professional conduct and exemplary efficiency. More on this story as it develops.

When other forms of Disney transportation have been involved in an accident or gone awry Disney has done their best to act quickly and efficiently. Of course, the recent Skyliner evacuation of three-plus hours was concerning, but Disney promised not to run the budding skyway until it was deemed safe and the crash was fully investigated. The 2018 Bus crash near Epcot resulted in 15 non-serious injuries and was due to a bus not slowing quickly enough at a plaza. Of course, we will still continue to love and appreciate the hard work that Disney Cast Members put in to keep us safe each and every day. It’s a hard job with guest safety and security the top priority of crew!

If an accident such as this does occur its nice to know that Disney crew members have the training necessary to ensure we are returned to safety as soon as possible.

Update: Subsequent reports have indicated this was a suicide attempt which you can read about here.