Gary Sinise takes over 1,000 kids of fallen soldiers to Disney World this week - Inside the Magic 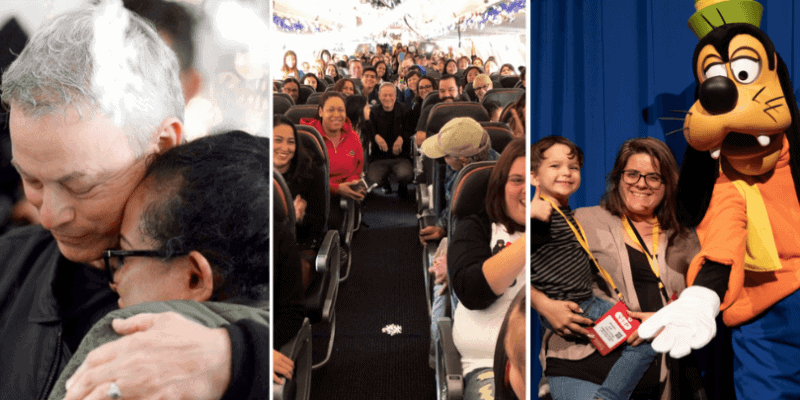 It’s that time of year again: the holiday season is in full swing, and that means that over 1,000 children of fallen soldiers get to go to Walt Disney World this week thanks to Gary Sinise.

Actor Gary Sinise — known for his role in Forrest Gump as well as his philanthropy efforts — and his foundation brought over 1,000 children of military heroes along with their loved ones to Walt Disney World on the trip of a lifetime. The group of over 1,750 people in total were part of the Snowball Express, a program started by the Gary Sinise Foundation that creates magical experiences for the children who need them the most, in the form of a trip to Disney.

The Gary Sinise Foundation partnered with American Airlines to get all of these children and their families to Orlando, Florida to visit the Most Magical Place on Earth. They left this weekend, and Sinise himself even had the opportunity of meeting and chatting with some of the children before they left for Walt Disney World.

This charter left Los Angeles this morning with 91 kids, 176 in all, and I got to take these photos with them before they left. I’ll join up in a few days. Have fun kids! We love you! pic.twitter.com/jPRuZ0iuIp

American Airlines even shared some photos of the Snowball Express kids arriving in Orlando.

This is by far the most magical time of year to visit Walt Disney World, but visiting the Disney Parks during Christmas isn’t the only thing that makes this trip special for these kids and their families. Every year, the Snowball Express brings the children of fallen soldiers on or after September 11, 2001. During the Snowball Express vacation in Florida, the children and their families get to partake in community activities and come together to honor their lost loved ones. The entire experience can bring about healing and happiness.

“The holidays can be especially challenging for grieving families. Each December, we host a five-day experience for 1,750+ children of the fallen and their surviving parent or guardian. As a therapeutic retreat with a blend of fun and inspiring programs, these families can lean on their peers for support. And this year we’re bringing Snowball Express to Walt Disney World Resort!” the Gary Sinise Foundation describes the Snowball Express on the official website.

It’s clear that the Snowball Express has changed the lives of these kids and their families. This is the third consecutive year that the Gary Sinise Foundation has taken these kids to Walt Disney World Resort, and we hope the magic continues for years and years to come.