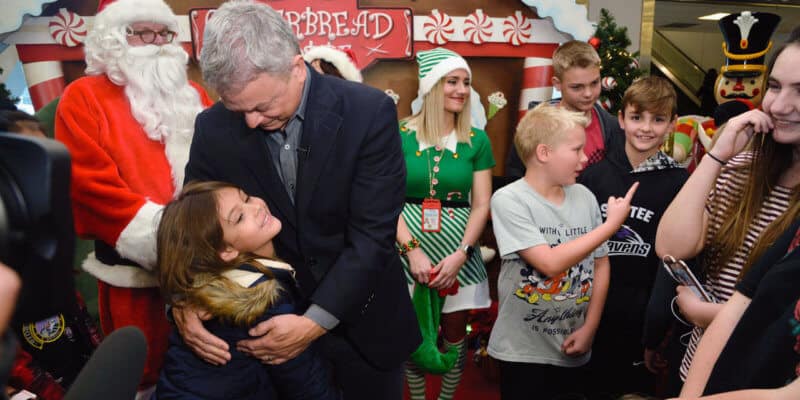 The 2019 holiday season is approaching quickly. And if you’re Gary Sinise, that means it’s almost time to bring thousands of children of fallen soldiers to Walt Disney World!

Every year, actor Gary Sinise brings well over one thousand children of fallen U.S. soldiers on the trip of a lifetime to Walt Disney World Resort. Back in 2017, Sinise, who is known to be a long-time supporter of the military and their families, established the Snowball Express, a program that brings children of fallen soldiers and their families to Walt Disney World for the holidays.

“The holidays can be especially challenging for grieving families. Each December, we host a five-day experience for 1,750+ children of the fallen and their surviving parent or guardian,” the program is described on the official website of the Gary Sinise Foundation. “As a therapeutic retreat with a blend of fun and inspiring programs, these families can learn on their peers for support.”

Over 1000 Gold Star Children travel w/ surviving parent, 1,750 in all, via @americanair to Disney World today as part of our @GarySiniseFound Snowball Express program. This charter left LAX this morning. I’ll join up in a few days. Have fun kids! We love you! pic.twitter.com/OfMEpVF1er

Sinise writes of the Snowball Express and its impact, “It’s something I feel is incredibly important for our nation, letting the children know that we do not forget their sacrifices and we honor them. And it’s such a great feeling to see them healing, smiling, and having fun.”

Since 2017, Sinise and his foundation have brought thousands of children to the Most Magical Place on Earth. And this year, the Snowball Express is bringing even more kids to Disney World. The foundation partners with American Airlines to make dreams come true for these kids’ and their loved ones. By the sounds of it, the Snowball Express has had a tremendously positive impact on these children and their families.

“It isn’t easy to put into words what Snowball Express meant to my 8-year-old daughter and me but I will try,” writes Jennifer Hanson shares on the Sinise Foundation website. “I guess the easiest way to explain it is to simply state that it was the first time since losing my husband that I went 5 days in a row without crying. Sure, there were a few moments of filling up with tears. However, those were tears of gratitude and pride.”

When some of the Snowball Express families left for Disney World from LAX back in 2018, dozens of people saw them off and stood for the Star Spangled Banner as over 100 children boarded their American Airlines plane. You can take a look at this video, which has since gone viral. We wouldn’t be surprised if a similar situation occurred at other airports for the 2019 Snowball Express.

I witnessed an international airport come to a complete stop today … At the Nashville airport I walked out into the concourse to this scene @americanairlines was flying a plane full of children who had lost a parent in combat, to Disneyworld on an all expenses paid trip and they threw a party for them at the gate❤️But when they announced them over the loud speaker and they lined up to board the plane the whole airport literally stopped and sang the national anthem with military present in salute. Most every person standing around, myself included was bawling at the sight of these kids and spouses who have paid so great a price for our country. To see all of this at Christmas time was so humbling. Seeing the general public in an airport stand still to honor these kids was simply beauitful. @bna_airport #nashville #fallenwarriors Gary Sinise Foundation #america #snowballexpress #christmas Garysinise

The 2019 Snowball Express December 7 through December 11. Registration for this year’s event took place back in August and families were chosen in consideration of the following criteria:

1. New families who never have attended
2. Families with a 17-year-old that will be graduating in the spring of 2019 or 18-year-old attending for the last time.
3. Number of years a family has attended. Priority will be given to families who have attended 4-7 years.
4. A lottery system will be put in place in an attempt for all families to experience Disney at least one time.

If you are interested in learning more about the Gary Sinise Foundation or if you or someone you love would like to look into the 2020 Snowball Express, visit the official website here.