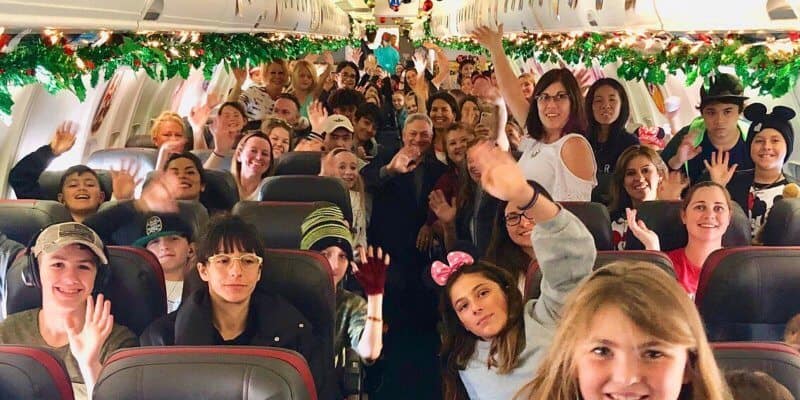 Over 650 families are being sent to Walt Disney World Resort this year as part of the Gary Sinise Foundation’s Snowball Program, an initiative aimed at brightening the holiday season for Gold Star families.

Gary Sinise, an Emmy-winning actor and long-time supporter of the military and their families, set up the Snowball Express program back in 2017 as part of the Gary Sinise Foundation, which serves children of fallen United States military heroes.

“The holidays can be especially challenging for grieving families. Each December, we host a five-day experience for 1,750+ children of the fallen and their surviving parent or guardian,” according to the official website of the Gary Sinise Foundation. “As a therapeutic retreat with a blend of fun and inspiring programs, these families can learn on their peers for support.”

Over 1000 Gold Star Children travel w/ surviving parent, 1,750 in all, via @americanair to Disney World today as part of our @GarySiniseFound Snowball Express program. This charter left LAX this morning. I’ll join up in a few days. Have fun kids! We love you! pic.twitter.com/OfMEpVF1er

Sinise writes on the foundation’s website that the annual Snowball Express trip to Walt Disney World is the organization’s way of making Gold Star families “feel remembered and for them to see that they are not alone. It’s something I feel is incredibly important for our nation, letting the children know that we do not forget their sacrifices and we honor them. And it’s such a great feeling to see them healing, smiling, and having fun.”

Several parents who traveled with their children to Walt Disney World as part of the trip have responded to Sinise on Twitter, sharing photos and anecdotes of their experiences and thanking Sinise for the opportunity. Mike Brewer, a parent who served in the Air Force and Army, wrote of his daughter, “She is risk averse. Won’t do ANYTHING like a roller coaster. Six trips and always a terrified back-out at last minute. Then you surrounded her with other Gold Star kids. And she rode them all. And loved it. Thank you.”

The Gary Sinise Foundation also shared several photos of the Gold Star children and their families’ experiences at Walt Disney World during their trip, thanking American Airlines as the trip’s sponsor.

A post shared by Gary Sinise Foundation (@garysinisefoundation) on Dec 9, 2018 at 3:16pm PST

Airports across the country also got into the holiday spirit in honor of the Snowball Express trip. USA Today reported that almost an entire concourse at Nashville International Airport stopped what they were doing and joined together to stand for the Star Spangled Banner as more than 100 of the Gold Star children boarded their plane to Orlando. Jen Tringale, Facebook user and witness, documented the event:

I witnessed an international airport come to a complete stop today … At the Nashville airport I walked out into the concourse to this scene @americanairlines was flying a plane full of children who had lost a parent in combat to Disneyworld on an all expenses paid trip and they threw a party for them at the gate❤️But when they announced them over the loud speaker and they lined up to board the plane the whole airport literally stopped and sang the national anthem with military present in salute. Most every person standing around, myself included was bawling at the sight of these kids and spouses who have paid so great a price for our country. To see all of this at Christmas time was so humbling. Seeing the general public in an airport stand still to honor these kids was simply beauitful. @bna_airport #nashville #fallenwarriors Gary Sinise Foundation #america #snowballexpress #christmas Garysinise

The 2018 trip to Walt Disney World was a dream come true for the children and guardians who were able to participate, but this certainly won’t be the last time Sinise and his foundation will help military families.

“We must do all we can to extend our hand in times of need to those who willingly sacrifice each day to provide that freedom and security,” Sinise writes on his foundation’s website. “While we can never do enough to show gratitude to our nation’s defenders, we can always do a little more.”

What do you think of the Gary Sinise Foundation’s Snowball Program for children of veterans? Let us know in the comments below!