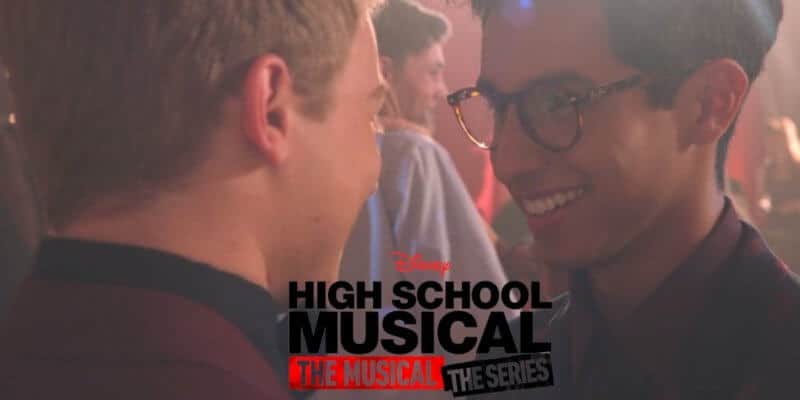 We’re all in this together!

In the most recent episode titled “Homecoming”, a romance started to spark, as the school’s Homecoming dance approaches, between two characters, Carlos, played by Frankie Rodriguez, and Seb, played by Joe Serafini.

If you watched the episode, you saw that the musical’s choreographer, Carlos, was extremely nervous but decided to go with his gut anyway and asked his cast member, Seb to be his date to the Homecoming dance.

Seb appeared to say yes to Carlos’s offer, but when the night of the dance comes, viewers see Carlos alone on the dance floor. Of course, Carlos doesn’t let this get him down and continued to support himself by dancing alone to a ‘be yourself’ pop song.

It doesn’t take long before Seb arrives and the two of them then share the dance together, which is when their relationship begins to blossom.

Frankie Rodriguez spoke with the Los Angeles Times recently and explained how the episode reflects how far society has come in such a short time, especially since the government officially recognized same-sex marriage.

“I think we kind of forget where we were 13 years ago. Gay marriage wasn’t legal, so even though it seems like that was 50 years away, it really wasn’t,” Rodriguez said. “[The series is] really shedding light as to what high school life is like right now and making sure that those kids that have never seen themselves onscreen have, finally, someone to connect to.”

Sofia Wylie, who plays the character Gina in High School Musical: The Musical: The Series, agreed with Rodriguez’s statement saying, “It’s all become much more normalized, and I think that’s really what the goal is.”

Disney Channel had introduced the network’s first-ever teen gay romance in the show Andi Mack, as its character, Cyrus Goodman, came out to Jonah.

You can now stream High School Musical: The Musical: The Series and Andi Mack on Disney’s new streaming service, Disney+.