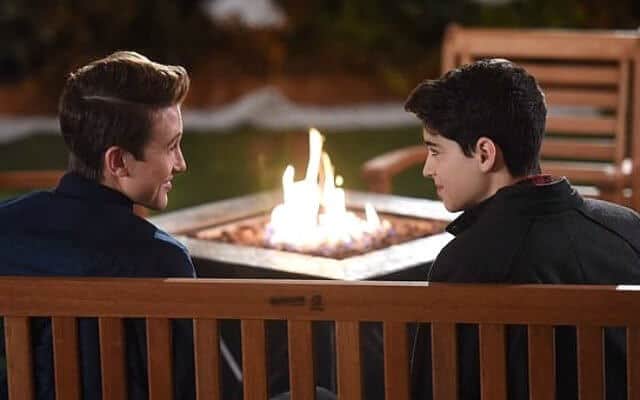 As Disney Channel’s “Andi Mack” comes to an end with its series finale, the cable channel finally sees its first ever storyline with the beginnings of an openly gay teen couple.

In the series finale, which just aired last week, we see 13-year-old Cyrus Goodman confess his feelings for his classmate TJ Kippen, who appears to feel the same way. In a special fire-lit scene, which seems to reveal the teen’s feelings for one another, Cyrus asks TJ “Is there anything else you want to tell me?” “Yeah,” TJ says, before asking him the same question. “Yes,” Cyrus responds, as TJ holds his hand before the camera pans away from the cozy fire-lit scene.

As we reported earlier this year, Cyrus’s sexuality was first confirmed in February–when Disney Channel first made history with their first ever character to say “I’m gay” on screen. Prior to this episode, Cyrus had come out to his friends Andi and Buffy in two separate previous episodes of the show, but had never actually said the words “I’m gay.”

Shortly after the special episode aired, Joshua Rush (who plays the role of Cyrus) reported that the reaction to his character coming out was “overwhelmingly positive.” After the episode’s premiere, Rush shared: “Over the last few days I’ve really gotten to see the myriad of ways that both this new coming-out scene for Cyrus, and this Jewish representation of his family, has affected the fans.”

Before its series finale last week, “Andi Mack” aired on Disney Channel for three seasons with positive acclaim from critics and audiences throughout its run. Even though the show is coming to an end, it still remains the highest-rated series on American television in its time period among all children aged between 6 and 14.

What are your thoughts on Disney Channel ending the “Andi Mack” series with its first ever gay teen romance? Let us know in the comments below!