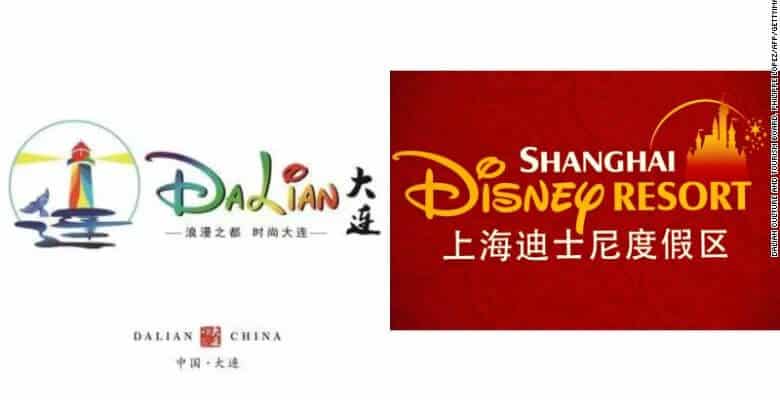 Have you ever come across something that looks so much like Disney but isn’t quite right? Us too. This happens with clothing, accessories, signage, and other everyday items and products that we see all over the internet and in our daily lives. Disney is such a recognizable brand that it’s probably natural for companies to want to take after the Disney look. But if a company seemingly uses the Disney design for its logo without permission, should Disney fight back?

The Chinese city of Dalian recently selected a new logo — and it looks an awful lot like it could have been made by Disney. Last week, the Dalian Culture and Tourism Bureau selected a winner for a contest it hosted where citizens could submit their designs for a new logo. The bureau chose the winning design because it uses a few strokes” to “vividly” showcase the city’s characteristics. But as Disney fans — and even if you’re hardly familiar with Disney — we can tell that the design looks heavily inspired by Disney. If you take a look at the new logo side by side with the Shanghai Disney Resort logo, you can see some similarities, particularly with the font for the word “Dalian.”

Since Disney opened a $5.5 billion theme park in 2016 — the Shanghai Disney Resort, which includes Shanghai Disneyland — we’re not surprised that Disney inspired someone to create a logo to promote tourism in their own city. Who wouldn’t think that giving something a Disney-inspired look would attract more tourists and travelers to their city? However, sometimes things like this are just too similar to ignore.

But we aren’t the only ones who think the two are similar. Soon after the logo was unveiled on the Chinese website, users took to the social media platform Weibo to share their thoughts — and it wasn’t long before the hashtag “Dalian city logo” was trending.

One person wrote on Weibo, ” “Isn’t it ridiculous that the tourism management bureau has never seen the Disney logo?”

Another said, “Do we need an investigation? This is apparently a copyright issue.”

After the internet became flooded with comments and concerns from those thinking the new Dalian city logo was an issue of copyright infringement and was an unauthorized use of the Disney look, the city responded.

“We are highly concerned after some netizens pointed out the work may have been a copycat,” the organizing committee said in a statement on Tuesday. “According to the adjudication rules, all participants should own the copyright to their submissions.”

As a result, a new winner could be chosen. At the time of this article’s publication, Disney hasn’t responded to the situation.

Do you think the tourism board for the city of Dalian in China should be allowed to use a logo that is similar to Disney? Or is it different enough that it’s okay? Let us know in the comments!