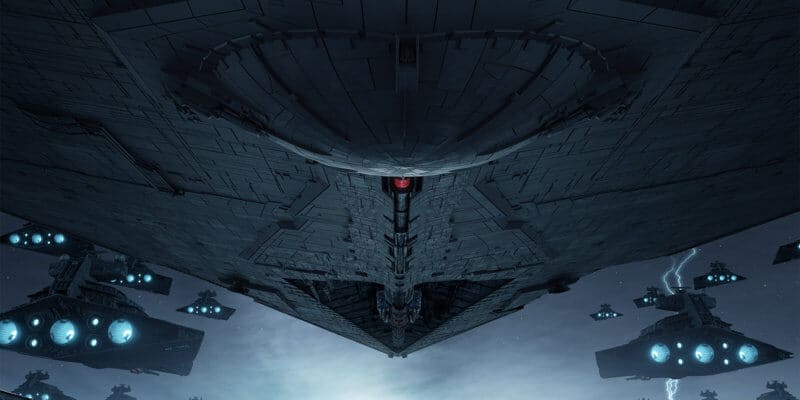 December 20, 2019, will be etched in Star Wars history. Star Wars: The Rise of Skywalker is finally released, AND Disney has debuted the latest edition of its now classic ride, Star Tours: The Adventures Continue. It now includes scenes and characters from the final film.

Yes, Star Wars: The Rise of Skywalker just came out, and you can already take a ride through the film. The ride may be called “Star Tours: The Adventures Continue,” but in a way, that adventure is now complete.

Since its first launch in 1987, Star Tours has gone through several updates to accommodate the expanded Skywalker Saga to include planets and characters from the prequels and, most recently, the sequels.

At a press event today, Imagineer Tom Fitzgerald spoke on the journey of creating Star Tours. He said, “our dream was because it was a programmable simulator with media that it could be updated over time.” Star Tours, actually did not get the name extension, “The Adventure Continues” until they made the updates to include the prequels.

When The Force Awakens debuted to strat the sequel trilogy, the Imagineers saw another opportunity to update. They said, “Well, we can keep up with the Saga. Let’s do it!”

But this latest edition of the beloved attraction is promised to bring the Star Tours adventures full-circle. Fitzgerald said, “J.J. [Abrams] was certainly putting a bow around the Skywalker Saga, and that’s what we wanted to do for Star Tours.” Along with speeding through the planets and landmarks of Episode 9, the Imagineer confirmed that this time guests will finally make it back to the starport.

Fitzgerald explained how C-3PO would get everybody back to the starport, but he would mistakenly land the ship in the “take-off” lane. The three pit-droids try to get him to move while another ship is coming right for them. But it all ends in a crash causing mayhem. “We have to end in mayhem,” Fitzgerald said. We’ll even get to see “Ace,” the pilot droid whose ship we steal, finally, come back and retake his ship. Everything comes full circle.

Adventures inside but separate from the movies

“It’s not a book report of the films,” Fitzgerald explained. Star Tours has always proudly existed inside but separated from the film. While it uses the planets and characters from the movie, guests are still characters in their own Star Wars Adventure. And this adventure is promised to be loved by old fans, new fans, and other guests who have never even seen the movie.

Updates in this journey include a visit to the Death Star crash site on Kef Bir, a transmission from Lando Calrissian, AND C-3PO decides they must join the massive battle at the climax of Episode 9. It is promised to be visually the most spectacular addition to the ride.

Here’s a clip from the scene at Kef Bir:

Fitzgerald confirmed that the new Star Tours will open, featuring only this new storyline before going back to the randomized “Juke Box Mode.” Once the ride is randomized again, there will be over 100 different story combinations. “That’s part of the fun,” he said. “I don’t even know what combination you’re going to get.”

This is a global launch of the update. The new Star Tours is now live at not just Disneyland in Anaheim, California, but also the Star Tours attractions at Disneyland Paris, Tokyo Disney, and Disney’s Hollywood Studios at the Walt Disney World Resort.

What do you think of these updates? Are you excited to ride the new Star Tours? Let us know in the comments!