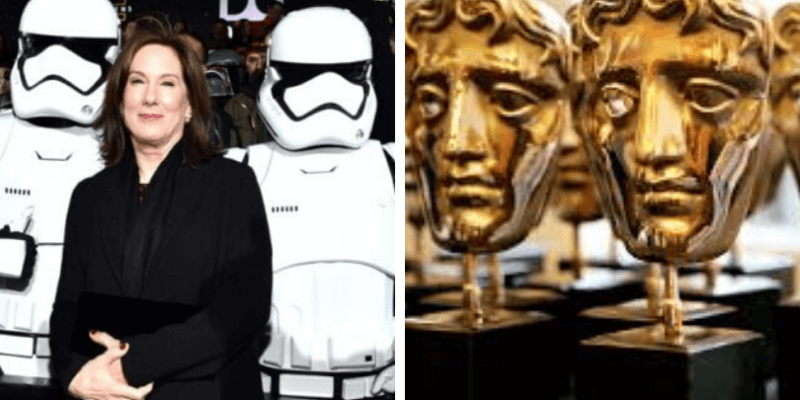 As the Skywalker Saga comes to a close, the woman behind the franchise, Lucasfilm President Kathleen Kennedy, will receive recognition for her work with British Filmmaking at the BAFTA Film Awards.

Here’s the breakdown of why this is a big deal:

BAFTA stands for the British Academy of Film and Television Arts. Basically the BAFTA awards are the British equivalent to our Oscar Night.

The BAFTA Fellowship is the highest honor bestowed by the British Academy. It is given “recognition of an outstanding and exceptional contribution to film, games or television.”

Yes, she does. But in producing films as grand as Star Wars, Kennedy has utilized an international team, including British resources. In fact, British actors, sound stages and locations played a huge role in creating the latest Star Wars films, and the franchise has employed several big-name British actors.

What? Did you think all those British accents you heard were fake?

When asked about the recognition, Kennedy said, “British filmmaking has always played a significant role in both my life and career…I am deeply honored to receive the Fellowship from BAFTA, and am incredibly thankful to have worked with so many talented members of our extended family in the British filmmaking community.”

Kennedy is not the first American filmmaker to join the BAFTA fellowship. She will be joining Amblin co-creator, Steven Spielberg, as well as actress Elizabeth Taylor, and filmmakers Martin Scorsese and Mel Brooks.

Okay, so what else has she done besides Star Wars?

Kathleen Kennedy is the President of Lucasfilm and was a co-creator of Amblin Entertainment.

For those of you who don’t know what that means, thanks to her close work with George Lucas and Steven Spielberg, Kennedy has been the producer for the following films:

Kennedy said her work with British filmmakers “began in 1980 with Raiders of the Lost Ark and continued with Temple of Doom, Empire of the Sun, Young Sherlock Holmes, War Horse, The Adventures of Tintin, and others.”

“I’m delighted that we are recognizing Kathleen Kennedy’s impressive career with a BAFTA Fellowship,” stated BAFTA Cheif Executive Amanda Berry. “She is a trailblazer who has opened the door for many people to join the industry, and the number of iconic cinematic moments she has helped bring to the big screen has enriched the industry and enthralled the cinema–loving public.”

So, yeah, this producer and this award is kind of a big deal. Hopefully, you learned something and found a new appreciation for the films of your childhood.

What is your favorite film from Lucasfilm or Amblin? Do you think Kathleen Kennedy deserves this award? Let us know in the comments!