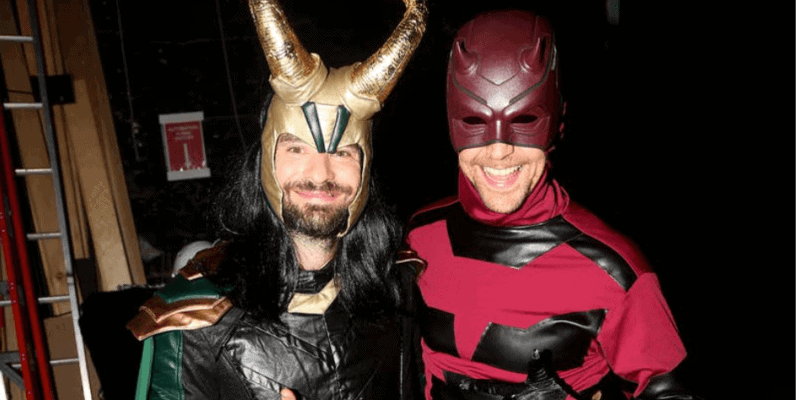 Probably our favorite thing about Halloween is seeing all of the amazing costumes! We’ve seen some pretty epic ones this year, but Tom Hiddleston and Charlie Cox just won our hearts with theirs. The two actors swapped places and dressed up as each others’ Marvel heroes Loki and Daredevil, and the results are priceless.

If you’re a fan of Marvel films and television shows, you’ll recognize these two and their Marvel characters: Tom Hiddleston plays Loki, God of Mischief, and Charlie Cox is well-known for his role as Daredevil. But the two actors are also working together right now in the Broadway show Betrayal. And it looks like they figured out how to blow everyone’s minds this Halloween season by swapping places: Hiddleston dressed in a Daredevil costume, and Cox dressed in a Loki costume.

The two actors got all decked out in their Marvel gear and surprised their fans at the Broadway stage door after the show. They even signed autographs and posed with Marvel fans while dressed up in their opposite Marvel superhero costumes. How awesome is that?

The ultimate Marvel fan could probably recognize that Hiddleston and Cox had swapped places. And even if the two had actually been wearing their typical Marvel superhero outfits, we would recognize them. But if we saw them dressed up as each other and walking down the street on Halloween night, would we be able to recognize that they were actually Charlie Cox in the Loki suit and Tom Hiddleston in the Daredevil suit? We’re not sure — they could probably fool us!

We mentioned that the two actors are currently starring alongside each other on Broadway, but they still have a lot more Marvel tricks up their sleeves. Hiddleston’s new Disney+ series Loki is going to make its debut on the new streaming service, which fans around the world are excited about. And Daredevil followers are definitely intrigued by the very real possibility of Charlie Cox playing the role in future MCU films — some are even saying this is as good as confirmed!

What do you think of Hiddleston and Cox dressed up as each others’ Marvel heroes for Halloween? Would you recognize them if you saw them in person? Let us know in the comments!