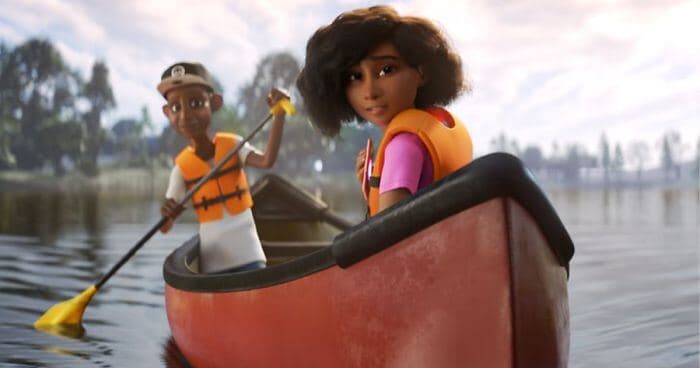 Before Disney+ had launched, Pixar had created a series of six brand new short films which was titled SparkShots.

The new short titles which launched with the service on November 12 included Purl, Smash and Grab, Kitbull, Wind, Float, and two which have not yet been released, Wind and Loop.

Though all of the SparkShots shorts have been decently popular, one, in particular, stands out and has been getting a lot of buzz — Float.

Float follows the story of a father who discovers his new son can actually float. The story turns when he realizes that the people around him are reacting to his floating son (with fear). Therefore, his father is then forced to choose whether or not to keep his son’s talent hidden to fit in with the others, or of he should let those on the ground just stare.

Writer, Producer, and Pixar animator Bobby Rubio shared that “it’s based on my own personal story of my son. In the story, the father is dealing with a son that floats, which makes him different from other children.” Rubio actually dedicated the short to his son.

Float will, in fact, pull on your heartstrings, but nevertheless, it is still phenomenal and is one of my personal favorites. But this isn’t the only new Pixar short that follows a storyline similar to this.

According to Pixar, the yet to be released short, Loop, follows “a non-verbal, autistic girl and a chatty boy [who] are partnered on a canoeing trip. To complete their journey across an urban lake, they must both learn how the other experiences the world.”

The description for the upcoming @Pixar short film LOOP:

“A non-verbal, autistic girl and a chatty boy are partnered on a canoeing trip. To complete their journey across an urban lake, they must both learn how the other experiences the world.”#AllAutistics pic.twitter.com/V9OAnYPCEx

Loop was directed by Pixar filmmaker Erica Milsom, who in the past has featured people with disabilities in her work. In fact, Milsom’s award-winning 2017 short film So Much Yellow follows the story of a 1960s family after they make the difficult decision to institutionalize their son with Down syndrome.

People are expressing extreme excitement about the soon to be released short on social media — Particularly because Loop features a nonverbal person of color.

and now im crying because she acts like me and im upset because it's on disney+ and I don't know if it'll ever be accessible outside of it and i am just really emotional right now for so many reasons like wow a character that shares my braintype and im already ??????

Hoping Pixar represents the Autistic Community positivity w/ the upcoming film Loop. According to what I heard, & the fact that it’s a non-verbal female Autistic POC, & the rainbow infinity symbol is used & no puzzle piece, it gives me hope. We’ll see??♾ #ActuallyAutistic

Are you excited to see the upcoming Pixar short, Loop? Let us know in the comments.