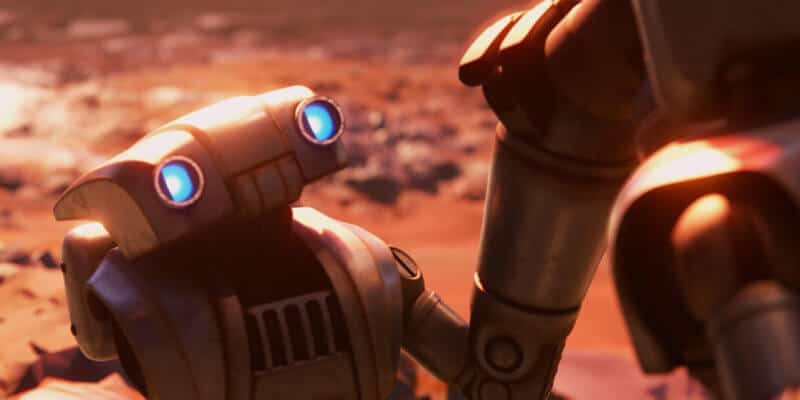 Disney-Pixar just released their latest short film in the SparkShorts series, and this one is sure to turn some heads. The new short “Smash and Grab” follows two robots, but it’s probably not what you think. Robots haven’t tugged on our heartstrings this much since “Wall-E” hit theaters, and even then, that was a completely different story.

We shared last week that Disney-Pixar published the first SparkShort film in the series called “Purl,” but “Smash and Grab” sets an entirely different tone for the series. Pixar writes that “Smash and Grab,” directed by Brian Larsen and produced by David Lally, is about two antiquated robots who risk everything for freedom and for each other after years of toiling away inside the engine room of a towering locomotive. While “Smash and Grab” doesn’t include adult language or explicit social commentary like “Purl,” it is still an excellent addition to the SparkShorts series in its own right. The short film showcases a heartwarming friendship between two robot coworkers and shares a glimpse into the dynamics of their relationship and journey to freedom. We won’t spoil the rest for you, but know that if you’re a fan of Pixar’s terrific animation and special storylines, you’ll like this one.

Pixar announced earlier this year that the shorts films in the new SparkShorts series would differ from other Pixar animated shorts in their experimental storytelling. While this short film isn’t explicitly experimental, much like with “Purl” its storyline and characters definitely possess more depth than the typical happy-go-lucky Pixar short we often see.

Pixar Animation Studios President Jim Morris shared last year, “These films are unlike anything we’ve ever done at Pixar, providing an opportunity to unlock the potential of individual artists and their inventive filmmaking approaches on a smaller scale than our normal fare.”

Any fan who takes a look at the exquisite animation and ability to tell a story from robots’ perspectives in “Smash and Grab” would agree that this short truly belongs in the SparkShorts series.

Meet the filmmakers behind “Smash and Grab”:

“Smash and Grab” will be one of many Pixar animated shorts available for viewing on Disney+, Disney’s new streaming service launching later this year. Fans can sign up for updates on when Disney+ will go live on the official website here.

What do you think of Disney-Pixar’s latest series of animated shorts? Share your thoughts in the comments!