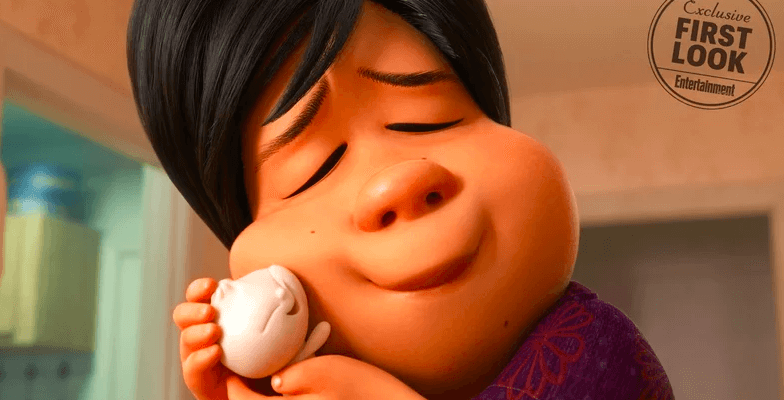 “Incredibles 2” arrives in theaters on June 15, and along with the new movie, Disney-Pixar debuts a new short film called “Bao.”

The seven-and-a-half minute short tells the story of a Chinese-Canadian woman who suffers from empty nest syndrome. When one of her handmade dumplings comes alive, she finds joy in taking care of the new little creature. Helmed by Domee Shi, “Bao” is the first Pixar short directed by a woman.

Shi was inspired to write a story flavored by her own upbringing as an only child of Chinese immigrants. “Often times it felt like my mom would treat me like a precious little dumpling, wanting to make sure I was safe, that I didn’t go out late, all that stuff,” Shi tells Entertainment Weekly. “I just wanted to create this magical, modern-day fairy tale, kind of like a Chinese Gingerbread Man story. The word ‘bao’ actually means two things in Chinese: Said one way, it means steamed bun. Said another, it means something precious. A treasure.” Shi’s mother, Ningsha Zhong, gave the crew hands-on dumpling-making demonstrations, which animators studied for the film. She also served as a cultural consultant. “Our technical directors and special effects team put the camera super close to her hands and recorded every single little detail of how she folded the dough, how she cut each piece, how she rolled each wrapper into that perfect little bun shape,” Shi says.

Creating the interior of the dumplings may have been even more of a challenge. Producer Becky Neiman-Cobb says, “You know Pixar and you know the special effects we can pull off here: explosions and water and splashes and fire and fireworks. One of the biggest challenges, and what brought our effects department to their knees, was Dumpling’s pork filling. That was hard. We learned there’s a very fine line between looking delicious and appetizing and looking wrong or gross. Making our food look delicious was a big triumph.”