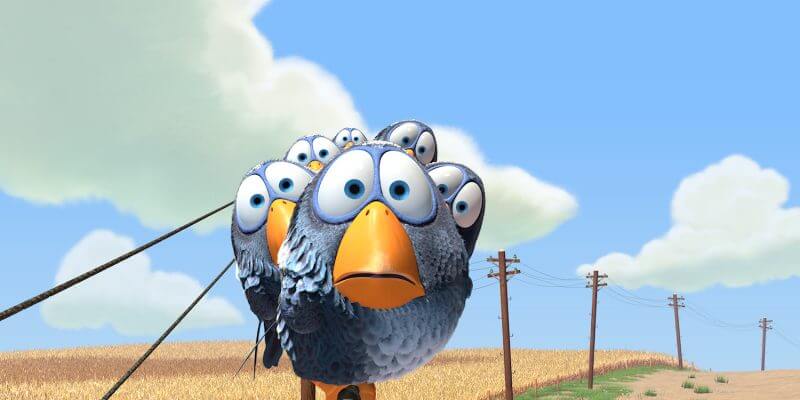 In the early days of motion pictures, news reels and/or cartoons would precede the feature film.  This tradition continues today with feature releases from Pixar Animation Studios.

From their first short film “Luxo Jr.” (preceding “Toy Story 2”) in 1986 through the most recent release, “Lou” in 2017 (“Cars 3”), Pixar has produced 19 “pre-show” computer generated cartoons. The animation studio has also released a baker’s dozen of short films as extras in DVD/Blu-Ray releases. A Brief Backstory
John Lasseter provided the animation for the two-minute computer-generated cartoon, “The Adventures of Andre and Wally B.”  This breakthrough cartoon was produced by the Lucasfilm owned company “The Graphics Group.” It would later be renamed “Pixar.”  Pixar was acquired by Disney in 2006. The company has released 19 computer-animated feature films. From “Toy Story” (1995) to “Coco” (2017), Pixar has enjoyed positive reception, great ratings, and several awards for their work.

Feature films aside, the short films seem to shine equally, if not brighter than their full-length cousins.  Conveying a concise and emotional story in a very short amount of time is not easy, but Pixar has proven it possible and even received several Oscars and other awards for these abbreviated animation amazements.  Five stand as personal favorites.

1. “For the Birds”
Directed by Ralph Eggleston, this short was released in 2000 at the Annecy Animation Film Festival and commercially in theaters the following year (with “Monsters Inc.”). “For the Birds” received the Academy Award for Best Animated Short in 2002.  The 3:27 long amusing animation showcases an amazingly animated group of small snooty birds hanging out on a power line.  Their reaction to the larger avian arrival is nothing short of rude.  However, justice is served in a humorous mishap when the larger, much heavier bird is forced from the line by the smaller birds, sending the smaller birds flying.  Being mean never pays off. The same birds also made cameos in “Cars” and “Inside Out.” This short film was included in “Pixar Short Films Collection Volume 1” (2007) and with the “Monsters, Inc.” DVD/Blu-ray release (2001 and 2012 -3D) 2. “Jack-Jack Attack”
Arriving as an extra (“The Incredibles”) instead of a theatrical short film, “Jack-Jack Attack” (2005) was originally intended to be part of the main film.  The Brad Bird-directed cartoon expands the antics and mayhem manifested by the infant Jack-Jack as his superpowers materialize.  Unfortunately, the “explosive” emergence of these enhancements takes place under the supervision of his babysitter, Kari.  Rick Dicker, the government representative reviewing this with her, bears a slight resemblance to a certain elder MIB agent.  This 4:44 animated short can be found with the DVD/Blu-Ray release of “The Incredibles.” 3. “Presto”
Never forget to feed your rabbit, especially if you depend on him for your magic act.  Presto DiGotagione found this out the hard way in the 2008 short film “Presto.”  Alec Azam, his clever and hungry rabbit, made sure to show his disapproval on not receiving the carrot he wanted to calm his grumbling tummy. Via the vehicle of portal-like magic hats, Alec avoids Presto’s demands and anger with a few clever realignments of the second hat.  This 5:17, Doug Sweetland-directed animation borrowed elements from “Ratatouille” to help complete the production.  It was shown before the Pixar movie “WALL-E.” 4.  “BURN-E”
“Basic Utility Repair Nano Engineer,” better known as “BURN-E” takes place around events of Pixar’s “WALL-E.”  It was not shown in theaters with the movie, but rather as an extra in 2008 release of the DVD/Blu-Ray.  Poor BURN-E struggles with replacing a lamp on the exterior of the “Axiom.”  At one point he is stranded on the craft’s exterior. Either due to distractions or forces beyond its control, BURN-E barely completes his task before the ship lands on Earth only to witness the lamp’s destruction again. “BURN-E” is 7:36 long and was directed by Angus MacLane. 5. “La Luna”
First shown at the Annecy Animation Film Fest (2011), “La Luna” was the touching short film that played before “Brave” (2012).  The 7-minute, coming of age tale takes viewers to the moon and back in an unexpected, cute, and clever manner.  Bambino joins Papa and Nonno (Grandfather) as they row out to sea.  The trio climbs up onto the full moon to sweep the fallen stars away.  Its Bambino’s first time tagging along and there’s some debate between Papa and Nonno as to how the small boy should do things.  Bambino shows his own unique style and smarts as the three push the stars aside, leaving a crescent moon behind. Director Enrico Casarosa wanted the look of this short to seem less like computer graphics. He achieved this by scanning watercolor paintings for both the animation and backdrops. All of the Pixar short films are fun, touching and well crafted.  These 5 favored shorts appeal to me the most and leave me eagerly anticipating the next round of mini-movies to play out prior to a Pixar film.  I’m also hoping that, after the “fun” preceding “Coco,” Pixar returns to using their own delightful stories for future releases.

Source and images: Andre & Wally B, For the Birds, La Luna, Wikipedia, YouTube