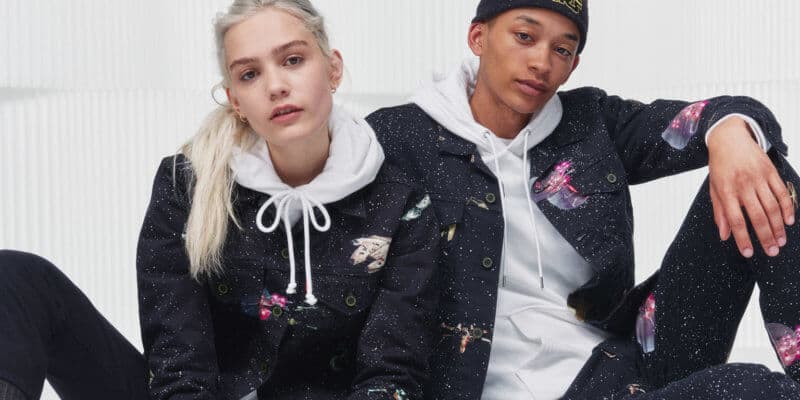 If you’re anything like us, you can’t get enough  Star Wars. From the out-of-this-world experiences at Star Wars: Galaxy’s Edge at Disney Parks to the anticipation for the upcoming release of The Rise of Skywalker, it seems like the entire world is buzzing with all things Star Wars. So when we found out that two of our favorite brands were collaborating to release a Star Wars Levi’s collection, we knew we had to share.

Levi’s and Lucasfilm have joined forces to bring fans the collection of the galaxy. This new line of clothing and accessories pays tribute to the Star Wars saga from the very beginning. Fans’ love for Star Wars films began when A New Hope hit theaters in 1977 and has transcended movies, television shows, books, comics, merchandise, and even the Disney Parks all around the world. And this new collection commemorates the nostalgia, dedication, and hope that has fueled Star Wars fans for decades.

The new Star Wars Levi’s collection coincides with the upcoming release of Star Wars: The Rise of Skywalker and is inspired by the iconic characters from the original film trilogy. The line includes something for everyone, from the classic Levi’s icons we know and love to streetwear styles. Fans can choose from tees, hoodies, Trucker Jackets, and jeans, as well as other accessories, all of which celebrate the history of Star Wars. What more could you ask for in a clothing line?

There are even items in the collection that feature fan-favorite quotes from the films, like “I am your father” (which we all know was said by the iconic Darth Vader), “In a galaxy far, far away…” (the recognizable statement from the intro of every movie), and of course Chewbacca’s immortalized catch phrase, “GGWWWRGHH!!!!”

It’s safe to say this is a collection designed by Star Wars fans, for Star Wars fans. And the two brands even have a history together!

“Lucasfilm and Levi’s are San Francisco neighbors. When we found out that the final chapter of the Skywalker Saga was coming at the end of 2019, we bundled up our Jedi and headed to Lucasfilm looking for droids,” said  Jonathan Cheung, Senior Vice President of Design Innovation at Levi’s. “And here’s a barely known, fun fact: Luke Skywalker was wearing Levi’s in the original trilogy – white Levi’s! Now it’s our turn to return the compliment with Vader, droids, Chewie and Leia.”

Take a look at the items in the upcoming Star Wars Levi’s collection below!

Which of the items in the Star Wars Levi’s collection is your favorite? Let us know in the comments!

Comments Off on Star Wars X Levi’s collection takes fashion to a galaxy far, far away