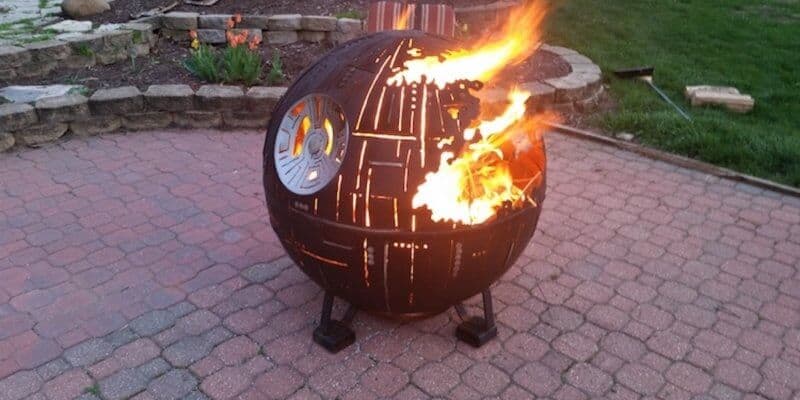 The “Star Wars” series has brought many themed merchandise items during its long run over the past few decades. Although, none have been this well-themed to have taken a traditional time spent with loved ones and turned it into an otherworldly celebration!

Summer is right around the corner, which means weekends outside with friends and family eating delicious BBQ! While eating burgers and other delicious grilled food is fun, the actual cooking can sometimes be a little boring. However, these 9 barbecues and accessories have transformed this experience into an intergalactic phenomena!

The TIE Hunter Starfighter is probably most known from the TIE Series during the Galactic Civil War, used mainly by the Galactic Empire. But in the form of this fire grill, it serves as the perfect place to get some crisp weenies for your family BBQ.

What’s most famous for serving as the Empire’s ultimate weapon in destroying entire planets full of innocent civilizations can also serve as a great place to cook some marshmallows or keep warm on a breezy summer night!

The infamous villain from the original trilogy who originally was meant to bring balance to the Force but then turned to the dark side has been transformed into the perfect grill to cook burgers for you and your family!

For those who can’t get enough of the TIE Starfighters, but also want a more controlled flame, they should take a look at this portable gas grill, which features Star Wars branding all over the otherworldly cooker. In fact, it even features a “Star Wars” emblem right on the grill, to burn the famous logo right into your meat!

For those still wanting that “space”-ious look with more of a retro feel, they can cook up their BBQ on this Death Star grill, constructed similarly to a vintage ball grill.

What better way to handle your meat and the force than with the perfect tongs! This ultimate grilling accessory features a handle that resembles one from an actual lightsaber.

Salt / Pepper Shaker on the Dark Side

When seasoning your ribs, what better way to do it than with the Star Wars series most famous villains, Darth Vader and a Stormtrooper?

Cooking BBQ can be quite messy. But with this apron, you can not only keep clean and safe from splashing oil, but you can also stay true to the dark side and look cool doing it.

There is no better way to pay homage to your favorite movie series than with a spatula that screams it!

What are your thoughts on all of these “Star Wars”-themed BBQ grills and accessories? Let us know in the comments below!

Comments Off on Out of this universe “Star Wars” barbecue sets!