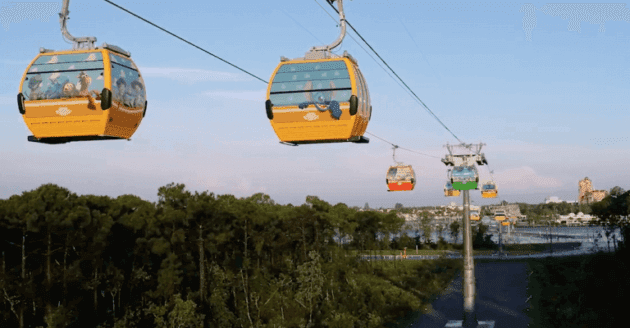 Walt Disney World’s newest transportation system, the Disney Skyliner, officially opened to the public on September 29. But it wasn’t long before unexpected issues occurred, as the Disney Skyliner experienced “unexpected downtime” on the Epcot line on Saturday evening. The downtime led to some guests being suspended in their gondolas midair for upwards of three hours.

Both Walt Disney World Resort officials and Reedy Creek Emergency Services were on the scene responding. According to a recent local news report, a Reedy Creek Improvement District spokesperson said that six people were evacuated from one Disney Skyliner gondola. One of the six people requested medical attention and was transported to the hospital, as well as an additional two other Disney guests.

All three have since been released, and at this time it is unclear whether more Walt Disney World guests have required medical attention since the incident. However, there have been no injuries publicly reported at the time of this article’s publication.

On Sunday evening, Walt Disney World Resort officials released a statement about the incident and their response to it.

The Disney Skyliner continues to remain closed while Disney officials continue to look into the exact cause of the downtime. Some Walt Disney World Resort guests have reported that they have seen the Disney Skyliner gondolas moving, although this is most likely related to testing. At this time, no reopening date has been set.

As we always note, Walt Disney World Resort is the Most Magical Place on Earth, but it isn’t immune to real-world issues and mishaps. We hope everyone involved in the Disney Skyliner incident is safe and we will update our Inside the Magic readers as soon as Disney announces that the Skyliner is up and running again.