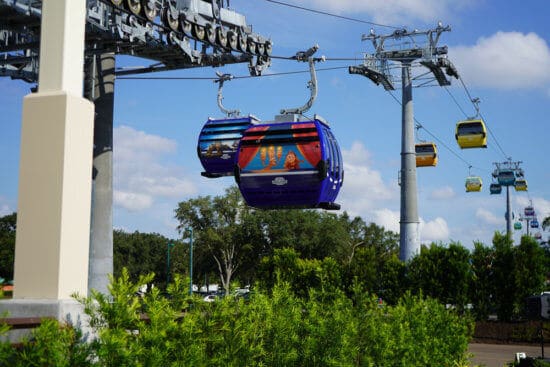 A couple visiting Walt Disney World this past weekend who were trapped on the Disney Skyliner recount their time inside the gondola, which lasted for over three hours and was looking to be a “very, very long night.”

Aaron Murray and his girlfriend Courtney Cole were among the many riders trapped on the Disney Skyliner system Saturday night. The two were trapped among six others in their vehicle but according to Murray, he says their gondola “got pretty lucky,” because they “had a good group.”

While trapped in the air, Murray says him and the rest of the riders in his cabin were able to joke around while they anxiously waited in the air. However, worry began to arise when it took about 30 minutes to evacuate the gondola behind theirs. Mostly because they saw one of the gondola’s passengers being taken out in a stretcher by firefighters.

Murray states their gondola didn’t have to be evacuated in the air and they were eventually able to make it back to the station as the system finally started moving again. Murray and the rest of his cabin were able to depart from the system at their next station.

Murray and his group of passengers were among many other passengers who did not require emergency services or rescue from the gondolas. However, Murray did make note there was a lack of useful communication from Disney while they were stuck, which others also pointed out on social media.

I think we are going to have to be evacuated by firetruck. It’s been an hour and a half now. We’ve been given no information this whole time. pic.twitter.com/ajZvDbPWze

While in the air, riders weren’t left completely without supplies as within each gondola are emergency kits, which Twitter user @Brad_George broke into, according to his tweet. Inside the box, bags of drinking water, an emergency whistle, and other supplies were found for guests to utilize.

Finally notified that there is emergency kit with water and a notepad ??? under the bench. Unfortunately it was tied shut. Had to break into it. #skyliner pic.twitter.com/jelU9m7xF5

Unfortunately, not all of the trapped rider’s experiences were as smooth as Murray’s as one user on social media claimed that after a few hours of being stuck in the air his mother became ill.

Update on this:
Still no rescue yet, mother is getting sick throwing up, gave her one of the bags in the emergency kit.

According to Murray, once they were safely rescued and returned to land, they were given gift cards and day passes from Disney for being trapped in the cable suspended system.

When asked by Yahoo Lifestyle if the experience totally ruined the magic for Murray and his girlfriend or if they’ll stick to the monorail in the future, he replied: “”I’m a huge Disney fan. I’ll definitely compliment everyone working there because it wasn’t their fault.”

However, they may take some time before using the high-flying transportation system again. “We probably will take them again, but we’ll give them a little bit of time to get everything worked out,” said Murray.

According to the Orlando Sentinel, Walt Disney World officials stated in a press release early Sunday morning that the Disney Skyliner experienced “unexpected downtime” on Saturday night. “As a result, the Skyliner will be closed while we look into the details surrounding the downtime.”

No injuries were reported due to the transportation system’s malfunction. At this time, Disney is investigating the cause for why the system paused in the air for three hours. The company has since stated that it was not due to a power outage.

It was originally believed the system went down after what appeared to be a crash between some of the cabins, which took place at one of the Skyliner’s loading stations (seen in the tweet below). At this time, it is not known if this was the actual cause.

This happened at one of the stations. You have the right to know pic.twitter.com/sNTYjgIC4i

“We have a team diligently looking into the cause of the malfunction on the Epcot line of the Disney Skyliner. We have been in contact with the guests, many of whom were on the Skyliner for more than three hours until we were able to restart the system. We express our sincere apologies for the inconvenience and continue to work with each guest individually.”