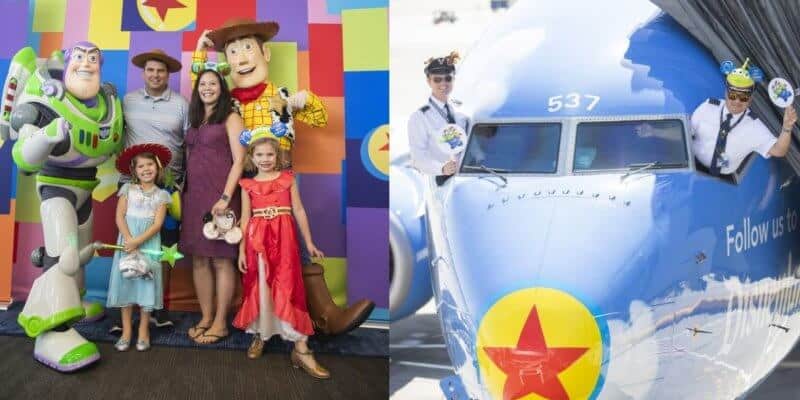 Reach for the skies with Woody, Buzz, Jessie, and friends. The Toy Story gang has taken flight in a brand new special-edition airplane. Alaska Airlines has revealed their brand new plane named “Friendship and Beyond at Disneyland Resort,” which is a beautiful tribute to Pixar Pier at Disney California Adventure Park.

This is the sixth painted airplane from Alaska Airlines which allows guests to celebrate the Disneyland Resort even before they arrive at the theme parks!

On October 7, the inaugural flight departed from Seattle, making a stop in San Francisco for a gate ceremony, and then flew off to their final destination, Orange County.

This unique airplane is a collaboration between Alaska Airlines, the Disneyland Resort, and Pixar Animation Studios.

In a recent Disney Parks Blog, Disney stated, “The Pixar Pier-themed 737-800, tail number N537AS, begins flying throughout Alaska’s route network today, welcoming guests with its artistic flair for many years to come. The exterior of the plane required more than 2,800 work hours and 24 days using 50 gallons of paint in 44 primary colors and custom shades.”

Guests can now fly alongside some of their favorite Toy Story characters, such as Woody, Buzz Lightyear, Jessie, Rex, and even the Green Aliens.

And while supplies last, the little travelers in your party can enjoy the Disneyland Resort Activity Fun Book and Kids’ Choice Picnic Pack.

Incredibles Park, Inside Out Headquarters, Pixar Promenade, and Toy Story Boardwalk are all waiting for your arrival at Pixar Pier in Disney California Adventure. Take a spin on the Incredicoaster, ride Jessie’s Critter Carousel, or hop on the Inside Out Emotional Whirlwind. If you want to grab a bite to eat, stop by Lamplight Lounge or Adorable Snowman Frosted Treats.

Do you want to visit Pixar Pier in Disney California Adventure  but need help planning your next vacation? Then don’t hesitate to reach out to our friends at Academy Travel. Click here for your no-obligation vacation quote from Academy Travel to make your Disney dreams come true!

Comments Off on To Friendship and Beyond: Disney’s Pixar Pier-themed plane by Alaska Airlines