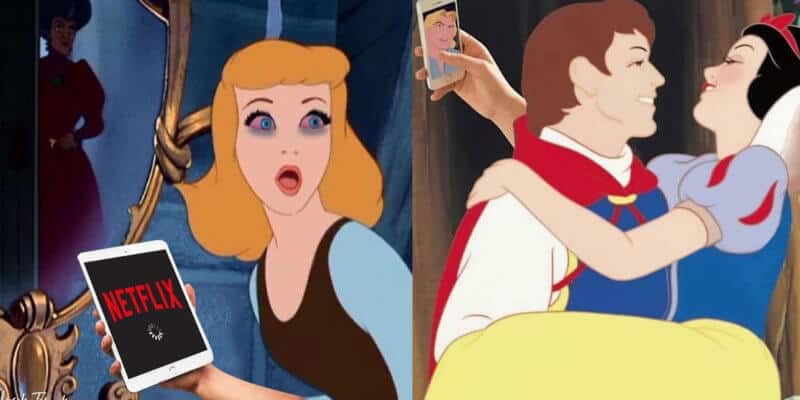 Some of the magic that comes from Disney’s most beloved animated films is the innocence and overall clean nature of their characters. However, one artist decided to alter that just a bit in a series of photos and the results are quite hilarious.

Japanese graphic designer Shusaku Takaoka took some of our favorite Disney characters in iconic scenes and reworked them with the use of Photoshop to incorporate new and more relevant elements to our time. Through the process, Takaoka was able to add a comedic and snarky tone to the once good-natured images and we can’t stop laughing.

Most know Cinderella as the hardworking maid to her evil stepmother and stepsisters. However, in Takaoka’s re-imagination of the Disney princess portrays her in a more relevant light. One with a Netflix binging addiction and also as someone who hoards McDonald’s fast food.

One of the most memorable scenes in Disney’s “Lady and the Tramp” is when the two pooches are enjoying a plate of spaghetti, where they famously share a piece of the pasta. However, Takaoka decided to rework this scene to add another guest to their party: Michelle from “Full House.”

Princess Aurora is known as one of the prettiest and most tired of the Disney Princesses. And in these images by Takaoka, he decided to poke fun at her infamous sleep spell by making her situation more relevant to today: by giving her a Starbucks mug and bloodshot eyes. The artist also played an age-old trick on the princess by portraying a man drawing a mustache on her while she sleeps.

Angelina Jolie’s portrayal of “Maleficent” has been widely praised by audiences everywhere! And Takaoka hilariously jabbed at the live-action character in his photo set by replacing her horns with the backside of a roasted turkey and we hate to say it, but it fits quite nicely.

Snow White is known by every Disney fan as the “fairest of them all.” Although, in this series of images Takaoka created of the character, she couldn’t be farther from it.

Some of Takaoka’s images show the princess looking over the shoulder of her prince at John Smith from “Pocahontas,” smashing a pie in her prince’s face, and other tongue in cheek reworks of the character.

What are your thoughts on these images by Shusaku Takaoka? Let us know in the comments!