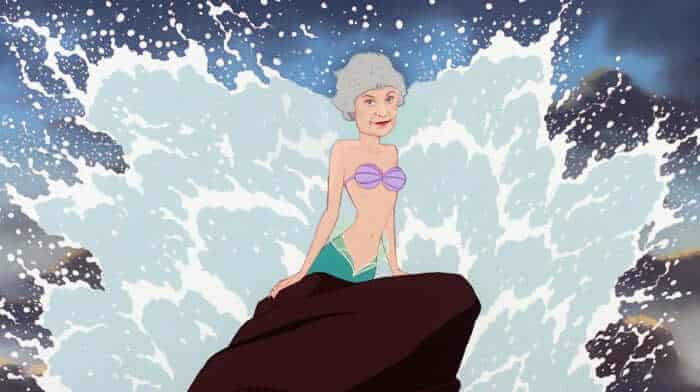 One artist took the cast of “The Golden Girls,” one of Disney’s most beloved TV shows of all time, and transformed them into some of the most beloved Disney Princesses and the results are both enchanting and hilarious!

Most know Dorothy, Blanche, Sofia, and Rose as a group of older single roommates in NBC’s classic TV show “The Golden Girls.” The women are most famous for their comedic one-liners and teasing banter among one another. However, one artist saw a more royal and majestic side to the ladies, which they used as inspiration for a series of images portraying the women as Disney Princesses!

The pictures are both alluring and also very amusing and we can’t get enough of them. Take a look at the full series of pictures below!

Blanche is known for enchanting many men in the Miami area, a group of forest friends is a walk in the park.

As a young woman, Sophia grew up on the tough streets of Sicily. Taking on The Huns is like a trip to the grocery store for this golden girl.

Dorothy might not go on the most dates in the group of ladies. However, she sure knows how to make an entrance as the little mermaid.

Raised on a farm in St. Olaf, Rose is probably the most animal-friendly of the bunch. Let’s just hope she realizes that wishing well is not a bird bath before she gets too close to her winged friends.

Dorothy has to be the most outspoken in the group. But as Pocahontas, Dorothy lets her fierce demeanor communicate the fact that every rock, tree, and creature has a life, spirit, and name.

Who better to discover a whole new world than this comedic duo?

Blanche is always the belle of every ball! Who better than this southern belle to take on the role of the style icon?

Rose loves sparkles and shine! However, a good St. Olaf story can also do the trick for this Scandinavian.

Of all the golden girls, Blanche would most likely be the one to have seven boyfriends. However, Sofia is probably the most fearless and most capable of dealing with an evil queen.

What are your thoughts on “The Golden Girls” reimagined as Disney Princesses? Let us know in the comments below!