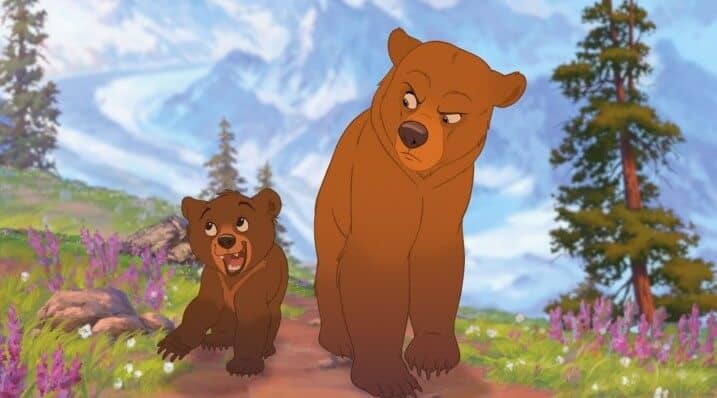 Do you love seeing the Disney animated classics coming back to the big screen as live-action reboots? If so, then you’re in luck! It is now rumored that the next live-action remake could be the underrated classic “Brother Bear.”

That’s right! According to We Got This Covered, Disney wants to reboot the 2003 animated feature in the near future and just like the remake of “Dumbo,” the human characters in the film will probably be played by real actors, while the animals will be CGI.

If you’re unfamiliar with “Brother Bear,” here’s what you need to know. The original animated Disney film follows the story of Kenai (played by Joaquni Pheonix) who is a young Indian brave with a certain hatred for bears because is brother, Sitka (played by D.B. Sweeney), was killed by one. Kenai, of course, killed the bear, but the second he did so, he magically transformed into one himself. And to top it all off, Kenai’s other brother, Denahi (played by Jason Raize), then wants to kill the bear Kenai has turned into. The only hope Kenai has is to reach the magical mountain where he thinks he can be changed back into human, but he can’t do this alone. He runs into a real bear cub, Koda, to help get him there and complete his mission.

The House of Mouse has had a lot of success lately with all of their live-action remakes. In 2016, Jon Favreau directed a live-action version of “The Jungle Book”, and more recently he directed “The Lion King.” There is also a live-action remake of “The Lady and the Tramp” that will be coming to Disney+ in November. With the impressive, lifelike CGI animals in “The Jungle Book” and “The Lion King,” we’re sure that “Brother Bear” would be just as impressive and visually stunning as the other CGI remakes.

Recently, it has also been rumored that Disney is looking to remake “The Princess and the Frog,” “Bambi,” and even “The Fox and the Hound.” Disney has yet to announce these, but we’ll keep you posted.

We love hearing about all the rumored live-action projects that could be in the works for Disney. Do you want to see a live-action remake of “Brother Bear”?