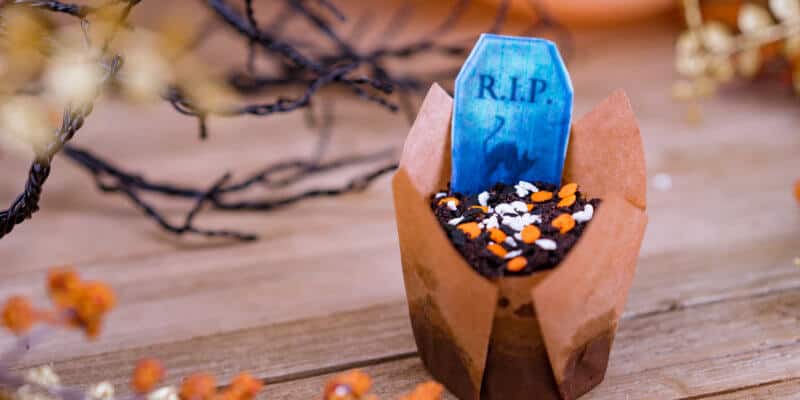 Disneyland Resort has lifted the veil on 14 spooky Halloween treats available at the Happiest Place on Earth beginning September 6. The only thing scary about these ghouslishly great goodies is that they’re only in the parks through October 31.

We’ve ranked these 14 frightful treats based on how horrifying and creative we think they are. From mummified donuts to eerie dessert “fries,” there’s something for kids (and kids at heart) to sink their teeth into during this year’s Halloween season.

This devious donut isn’t as scary as it looks. On the other hand, it’s not necessarily as creative as some of the other treats on the list. But then again, what’s so scary about a donut with a peanut butter and jelly filling and icing drizzled all over the top, except maybe those edible eyes? Hey, we’re not saying we won’t try it. We’re just saying we might try it last.

By now, you’ve probably guessed that Oogie Boogie is the central villain this year at Disneyland’s Halloween celebration, and we love that the rice krispy treat is made into his likeness. It doesn’t get huge points for creativity, but who doesn’t love a rice krispy treat at Disneyland? Find it at Candy Palace, Pooh Corner and Marceline’s Confectionery at Disneyland Park and at Trolley Treats and Bing Bong’s Sweet Stuff at Disney California Adventure.

This is one of Disneyland’s Halloween treats that isn’t sweet, and while we usually think of fall treats as sweet, we like the idea of a Hades-inspired food item. This all-beef footlong hot dog is inspired by Hades from “Hercules.” It’s served with all kinds of savory toppings like cheese sauce, peppers, feta cheese, and more! You can find it at Award Wieners, and we are awarding it with our #12 spot on the list.

This version of Disneyland’s apple is made to look just like the poison apple from “Snow White,” but this one won’t put you to sleep while you wait for a kiss from a prince. Pick one up, if you dare, at Candy Palace, Pooh Corner and Marceline’s Confectionery at Disneyland and at Trolley Treats and Bing Bong’s Sweet Stuff at California Adventure during the spookiest season of the year.

The mini version looks just as good as the original Poison Apple. Kind of. You’ll be able to find this sweet cake pop at most of the park’s confectioneries.

This is one of our most favorite candy apples at Disneyland. This evil dessert combines a chocolate covered candy apple and rice krispy treats. Maleficent’s trademark horns are made of gooey rice krispy treats and the devilish dessert is almost too scary to eat. Almost. Find these apples at the confectioneries in the parks next month!

Glow cubes make every drink at a Disney Park even more magical. This sweet, non-alcoholic drink has a frosty, slushy texture and comes with two dice-shaped glowing cubes to keep as a spooky souvenir after you finish your drink. Find it at Hollywood Lounge at California Adventure once September “rolls” around.

Nothing’s more fall-inspired or Halloween-appropriate than caramel apple, and at Schmoozies! at Disney California Adventure, you’ll get into the fall mood when you try this smoothie made with real apples, ice cream and caramel sauce. There’s even a caramel apple lollipop on top, just for good measure!

Graveyard Cupcakes are back this Halloween, and they’re better than ever!

But this devilishly decadent chocolate cupcake is hiding an eerie secret: it has a rich cherry filling and dark chocolate mousse on the inside. One thing that’s no secret? It’s covered in Halloween-themed sprinkles! We know this isn’t a brand-new treat at Disneyland, but sometimes oldies are goodies, and this one is one of the best! Find this creepy cupcake hiding at Jolly Holiday Bakery Café at Disneyland next month!

We can think of 101 things to love about this frightfully festive brownie, not the least of which is the fact that it’s topped with white chocolate mousse and dark chocolate mousse. Disney brownies are always top-notch, but this one gets “brownie” points (pun intended) for the eerie colors and the candy piece that features Cruella’s likeness. If this doesn’t scare you, no evil thing will! Try one at Jolly Holiday Bakery Café at Disneyland September 6 through October 31.

We love that this shake is mint chocolate chip-flavored, and we love that it’s inspired by Minnie herself. And we really love her chocolate cream-filled cookie ears and her edible trademark bow and dots in bright Halloween colors. We’re sure this milkshake will be all the rave when it’s introduced next month!

Who doesn’t love churros at Disneyland? This Halloween Churro Overload (that’s what we call it anyway) can be found at Cozy Cone at California Adventure during the Halloween season. Dive in to this devilishly decadent dessert that features traditional Disneyland churros rolled in crumbled chocolate cookies, topped with gooey green icing, gummy worms and Halloween candies.

What’s better than churros at Disneyland? How about villain-inspired churros? Maleficent has cast her spell on these churros again this year, and even “poor, simple fools” will want a taste of these churros, inspired by the Mistress of All Evil herself. The traditional fried churros are covered in chocolate cookie crumbles and sugar in Maleficent’s trademark colors–green and purple. And even though this dessert isn’t the absolute most creative one on our list, we are mesmerized by Maleficent’s colors. There’s something terrifying and magical about them–all at the same time! Beginning in September, you can find them at select churros carts in Town Square and near Sleeping Beauty Castle.

We think this amazing dessert fries are the spookiest and most creative item on our list. Kudos to Disney for all kinds of creativity, starting with fiendish “fries” that are actually made from funnel cake dough, (yum! Funnel Cake fries!). And even though there’s more than enough to share, you won’t want to! These fries are topped with candy corns, gummy candies, crushed cookie pieces, chocolate candies, cream cheese icing and whipped cream that looks just like Oogie-Boogie himself. If you have enough will power to try only one Halloween treat this year, let it be this one beginning September 6.

Which of these treats do you think will be your favorite? Which ones will you be trying for the first time next month?