Disney Reveals How They’re Enforcing 4-Hour Limit at Galaxy’s Edge, May Include Stormtroopers - Inside the Magic 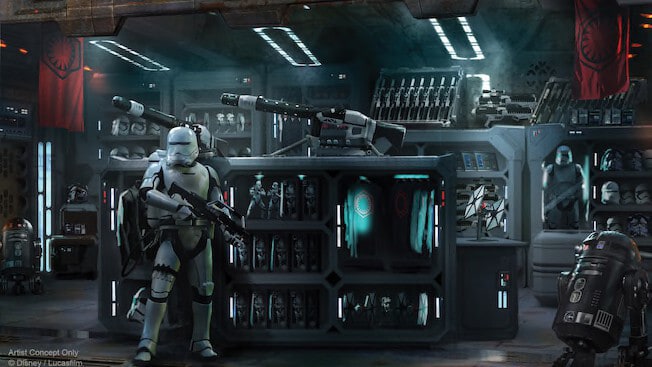 As the opening of Star Wars: Galaxy’s Edge at Disneyland approaches, more details have been revealed of how the theme park will cycle through all of its guests in their designated reservation-only 4-hour windows, and the answer is simple — colored wristbands.

As many fans know, we saw the opening of the reservation period last week, when fans chained themselves to their computers in hopes of securing a time slot in the land during this “soft opening” period and today we have new details of how this experience will play out for these “lucky ones” (guests will be able to freely walk about the land for hours on end beginning June 24).

The OC Register has reported that Disneyland will issue colored wristbands to visitors during the reservation-only period for each of the four-hour windows. As one can probably imagine, newly-admitted Galaxy’s Edge visitors will mix in with those already in the land. Although, with these colored wristbands, Cast Members will easily be able to track who can and cannot remain in the land past certain times of the day.

According to the OC Register’s report, it’s believed that after each four-hour window ends, Disneyland employees may turn away visitors with expired wristbands attempting to enter the Millennium Falcon: Smugglers Run, Oga’s Cantina, Docking Bay 7, and some of the other out of this world experiences found in the new land.

“At a certain point, if we have to, then we’ll start to ask them to leave the land,” said Disneyland vice president Kris Theiler. While discussing the land preview, the vice president continued, “Four hours is a long time in the land…Most guests are going to find that they’re ready to roll after four hours.”

With all of this new knowledge, you might be wondering to yourself: How does Disneyland plan to remove stragglers in the land? “We’ll be utilizing the troopers to help us, for sure,” Theiler joked.

In all seriousness, the reservation system was put in place and designed to manage crowds and minimize wait times, while also keeping the land below capacity.

According to Theiler, the goal is to keep wait times for Smugglers Run under two hours. However, accommodations will be made if the attraction should experience any downtime.

The OC Register reports that Disney is hoping to disperse visitors throughout the land during this period to persuade riders to postpone their journey of Smugglers Run until the second or third hour of their visit when wait times will be less. “We want to try and make sure that people aren’t spending the whole time standing in the queue,” Theiler said.

What are your thoughts on this colored wristband system to manage visitors’ time in the new land? Let us know in the comments below!