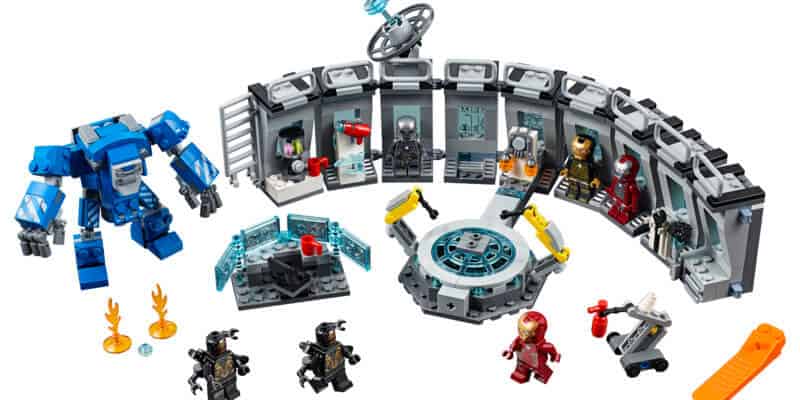 The first wave of LEGO sets for the upcoming Avengers: Endgame movie has officially been revealed. The five sets range from $19.99 to $99.99 and feature iconic scenes from the epic finale to the Infinity Saga. Check out the full line up of all 5 sets below!

WARNING – SOME SPOILERS MAY BE REVEALED BY THESE SETS – WARNING

(Though we’ve learned from past releases that these LEGO sets are pretty inaccurate in terms of actual events in the film, but still, a warning.) 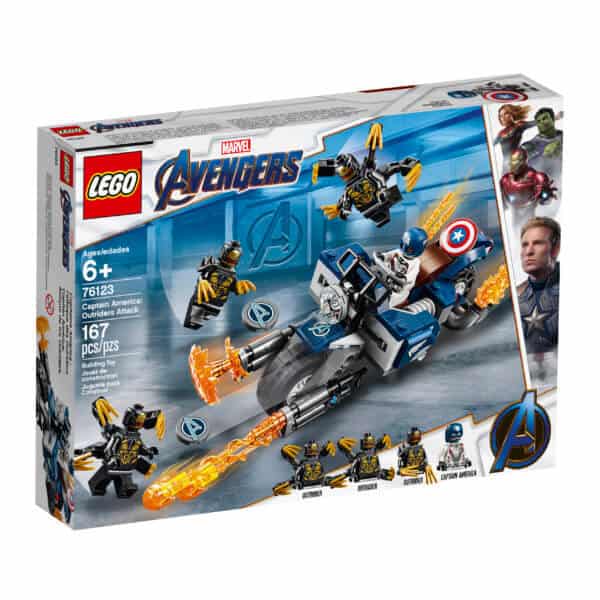 Build Captain America’s bike and attack the Outriders! (Click images below for a closer look!)

Take on 3 Outriders with Captain America’s bike! Fight back with the Captain America shield shooters. Then jump out of the cockpit, detach the blasters, and battle those enemy Outriders one on one!

• Detach the blasters and put them in Captain America’s hands ready for battle and imaginative play. 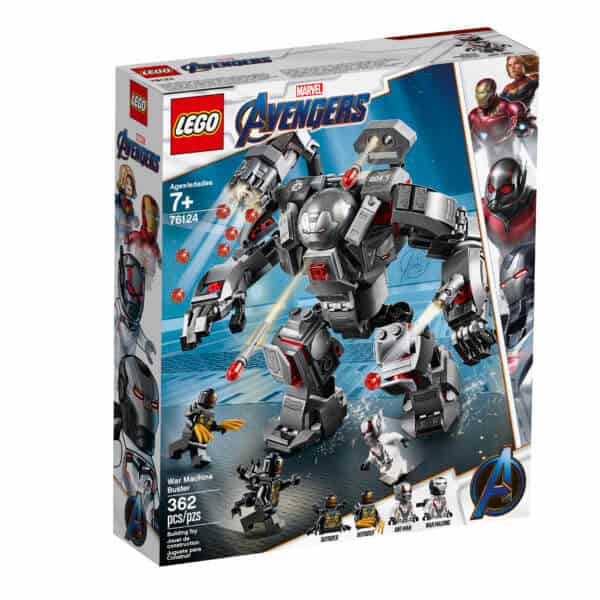 Overpower the Outriders with the War Machine Buster mech model! (Click images below for a closer look!)

Emergency! Ant-Man is under attack by the dangerous Outriders. Fly to the rescue with the mighty War Machine Buster! Fire the 6-stud rapid shooter and the flick missiles. Grab an Outrider with the massive mech’s powerful hands. Then detach the stud-shooting cannons and battle the enemy on the ground with War Machine!

• Detach the stud-shooting cannons and place in the War Machine minifigure’s hands and on his shoulder.

• Recreate thrilling action from the Marvel Avengers movies with this creative construction toy. 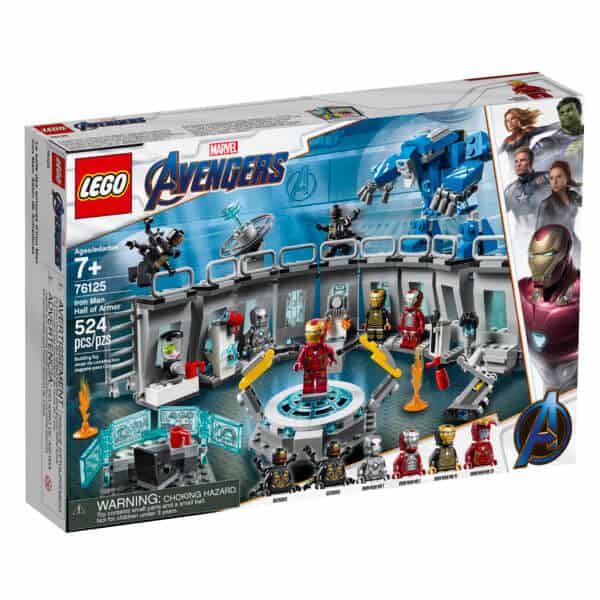 Join Tony Stark in the Iron Man Hall of Armor and experiment with new tech! Make a smoothie in the kitchen. Work at the desk and get suited up using the robotic arms. Lift heavy objects in the Iron Man lab wearing the massive Igor Suit. And if your experiments go wrong, get the robot to put out fires with the fire extinguisher. But watch out—an Outrider is trying to break in so grab a weapon and capture this dangerous invader! You can rebuild this awesome Hall of Armor in loads of different ways, so the action never stops!

• This buildable superhero toy features an Iron Man lab with detachable modules that can be combined and stacked in many different ways to create alternative play experiences.

• Connect modules into a circle to create a screen room or a prison for the bad guys.

• This superhero playset also includes an Igor Suit mech, featuring an opening minifigure cockpit and posable arms and legs, and a posable robot on wheels for imaginative play.

• Recreate exciting action from the Marvel Avengers movies with this cool LEGO® building set for kids. 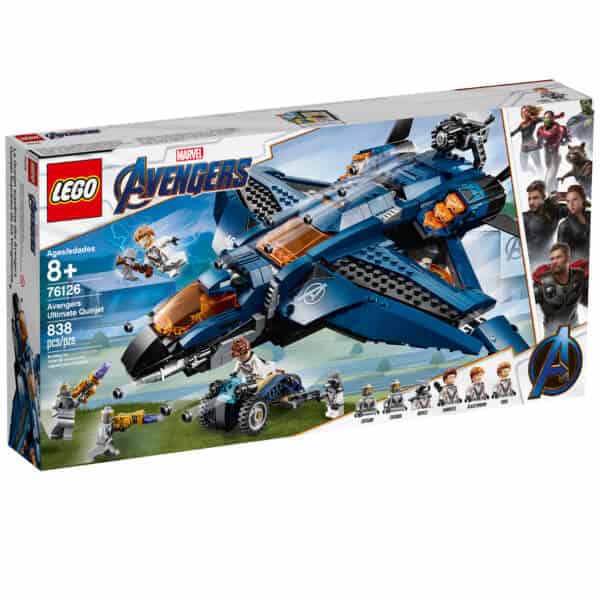 Create the Ultimate Quinjet and battle the Avengers’ enemies! (Click images below for a closer look!)

Get set for battle against the Chitauri with the Avengers Ultimate Quinjet! Prepare the weapons with Rocket and Thor in the passenger compartment. Jump in the cockpit with Black Widow and take off. Fire

the stud shooters and the 6-stud rapid shooter. Make a smooth landing and continue the fight on the wings. Then surprise the enemy with the stud-shooting trike! 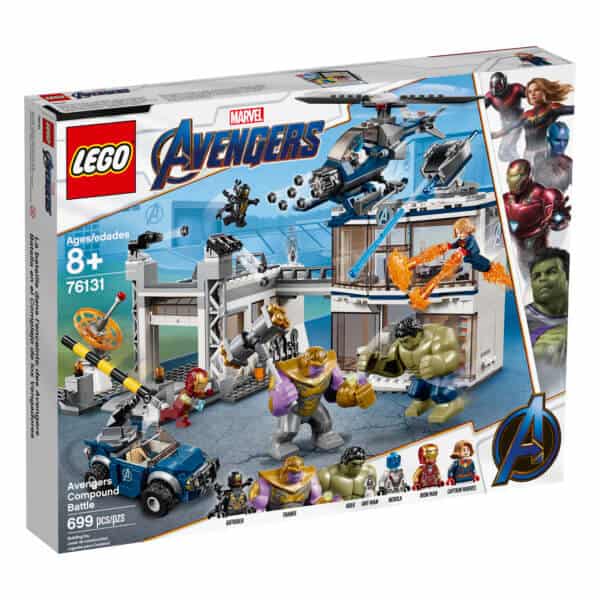 Construct the awesome Avengers HQ and fend off intruders! (Click images below for a closer look!)

Team up with Iron Man, Captain Marvel, Hulk, Nebula and Ant-Man and defend the Avengers’ compound! Make plans in the office and grab weapons from the table’s secret compartment. Monitor Thanos and the Outrider’s approach to the Avengers HQ with the radar, then speed into action. Activate the rooftop defense system. Target the Outrider with the offroader’s dual stud shooter, then launch the Avengers’ helicopter and fire its rapid shooter!

• This construction toy features the Avengers compound with a 2-level office building, helipad, garage, plus a helicopter and offroader for creative play.

• The office building features: 2 Avengers ‘A’ logo elements on the exterior wall; rotating, tilting spring-loaded shooter on the rooftop; lower level with an entrance, buildable rotating computer and a ‘laser-beam’ safe; and an upper level with a meeting room, table with secret compartment, rotating door leading to the helipad and accessory elements including 3 chairs, 2 guns, 3 cups and a jug.

• The compound also features: a helipad with 2 dual stud shooters and bridge to the office building; garage for the offroader with a ramp, opening barrier and a rotating, tilting radar dish; and tool racks with crowbar, wrench, welder and circular saw elements.

• The Iron Man minifigure and Thanos and Hulk big figures are all new for March 2019, and the Nebula minifigure and Ant-Man microfigure each feature new-for-March-2019 Avengers team suit decoration.