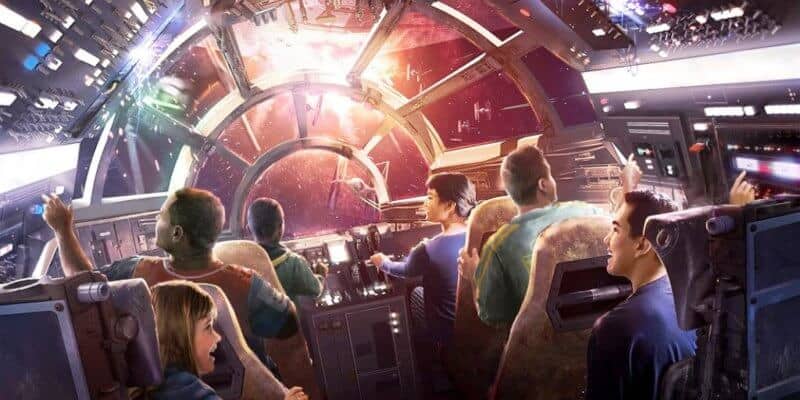 Think you’re ready to tackle a standby queue for Millennium Falcon: Smugglers Run when it opens at Star Wars: Galaxy’s Edge this May? Think again. Disneyland just announced that guests without a reservation for entrance into the newest land won’t be allowed in within the first month of opening, and there won’t even be a standby queue to get in.

That means that fans wanting to see inside Star Wars: Galaxy’s Edge within the first 24 days after the opening date will need to have made a free advanced reservation for the land. (Disney says information on how to make a reservation will be available on Disneyland.com and Disney Parks Blog at a later date). Those staying at the Disneyland Hotel, Disney’s Grand Californian Hotel & Spa, and Disney’s Paradise Pier Hotel from May 31 through June 23 are granted a reservation automatically.

“There will be no standby access to the land and we want to make sure that that’s clear for guests. We don’t want guests coming to the park thinking, ‘I don’t have a reservation. Maybe I’ll just get in the queue and I’ll be able to get in.’ We’re not going to have a standby line. So it will be limited solely to those guests that have reservations.”

Additionally, even guests with reserved access to the new land will only be given a limited window of time to explore it. Though Disneyland hasn’t shared specific details, it seems as though guests should have enough time within their window of access to ride Millennium Falcon: Smugglers Run (which will be the only of the two attractions available for at least the initial opening month), meander Black Spire Outpost, and hopefully grab some galactic grub. Theiler also shared the following on the time restriction for guests with reservations:

“We will be giving guests a window of time, but we’re still working through what that looks like and the duration for that. We’ll be working hard to ensure that guests have enough time in the land to see all the great things and experience the attraction. We know guests might want to stay in there all day, but we’ve got a whole big group that wants to get in there. We’re just trying to balance all those things and really deliver the right solution for our guests.”

If you won’t be one of the lucky few visiting Galaxy’s Edge during the initial weeks of opening, don’t worry. Beginning June 24, guests won’t need a reservation to access the land. Disneyland is currently developing a virtual queue system so guests can spend the day enjoying themselves at Disneyland while waiting to be notified that they can enter Star Wars: Galaxy’s Edge. This means you can still get your money’s worth of Disneyland park admission and have a great day at the theme park while you wait to be given access to the most highly anticipated land yet. And since Millennium Falcon: Smugglers Run won’t have any FastPasses, this sounds like a pretty sweet deal.

Still, even with a reservation system and a digital standby line, there’s no telling how long the wait will be for Millennium Falcon: Smugglers Run or even for Star Wars: Rise of the Resistance once each attraction opens at Disneyland. As we’ve seen with Flight of Passage in Pandora – The World of Avatar, a popular new attraction with state-of-the-art ride technology doesn’t necessarily become less popular as time passes.

To make the waiting a bit easier, Disneyland also announced that they plan to administer bathroom passes to those waiting in line. Guests wanting to use the bathroom will be given a plastic bathroom pass so they can exit the queue, visit the bathroom, and rejoin their party after waiting in a designated queue re-entry area. This system is already being utilized in Pandora – The World of Avatar, so we’re excited to see how it will work at Galaxy’s Edge.

As the opening of Star Wars: Galaxy’s Edge at Disneyland approaches, we can’t help but wonder how crowd control will be handled when the land opens later this year at Disney’s Hollywood Studios at Walt Disney World. So far, Disney has said a reservation won’t be offered or required to enter Galaxy’s Edge on the opposite coast, but one thing’s for sure. “Star Wars” fans are all over the country, as the hype for Galaxy’s Edge is just as real in Orlando as it is in Anaheim. We’ll keep you posted when we learn more. For now, we’ll be itching for our chance to visit.

Will you try to make a reservation to enter Star Wars: Galaxy’s Edge within the first weeks of opening at Disneyland? Let us know in the comments!