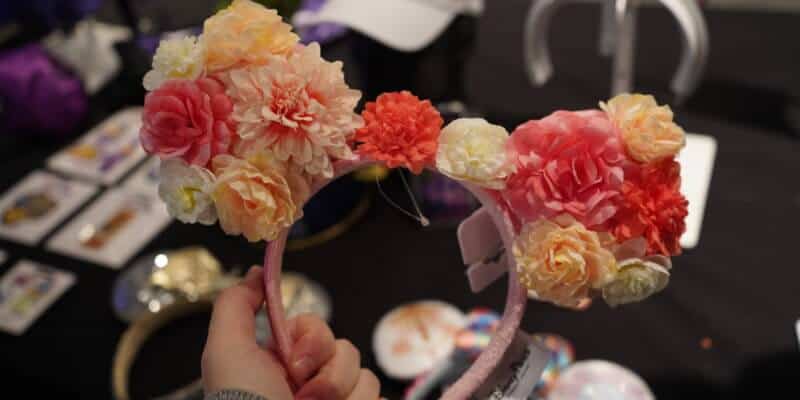 Winter might still be here, but you can already start looking forward to smelling the flowers of the spring with these new Floral-inspired Minnie Mouse Ears, which will be premiering in the Disney Parks in the next few months.

Recently, Inside the Magic was invited by Disney to an exclusive preview of some of the merchandise coming to the Disney Parks in the coming months, and here is a look at one product we’re losing our seeds over.

Just in time for the Epcot International Flower and Garden Festival 2019, which is only a month away, you’ll soon be able to join in on this seasonal celebration with these new ears.

Reminiscent of a design you might have seen on Etsy, each Minnie Mouse Ear is created from the combination of pink, yellow, and orange carnations, roses, and peonies, which perfectly capture the season. The new ears also feature a hot pink headband with a fuzzy pale pink interior lining.

Another pair of recently previewed Minnie Mouse Ears you don’t want to miss is the New Castle Ears Headband.

The ears feature allover silver sequins, a bejeweled castle icon, and an iridescent gold bow. Whether you’re visiting Disneyland or the Magic Kingdom, the castle is one of the most beloved and recognizable icons in the park. We think these eye-catching new Castle Ears would make Cinderella and Sleeping Beauty proud.

It’s not clear when exactly the Floral-inspired and Castle Minnie Mouse Ears will be released in the parks, but Disney says they’re coming soon. We’re hoping they also make their way to shopDisney in the near future. They will likely cost around $27.99, which is the price of the recently released Potion Purple Minnie Ears and various other Minnie Mouse Ear Headbands.

Do you think these new Floral-inspired Minnie Mouse Ears are the perfect accessory for Spring? Let us know in the comments below!

Comments Off on SNEAK PREVIEW: New Floral-inspired Minnie Mouse Ears are coming to the Disney Parks