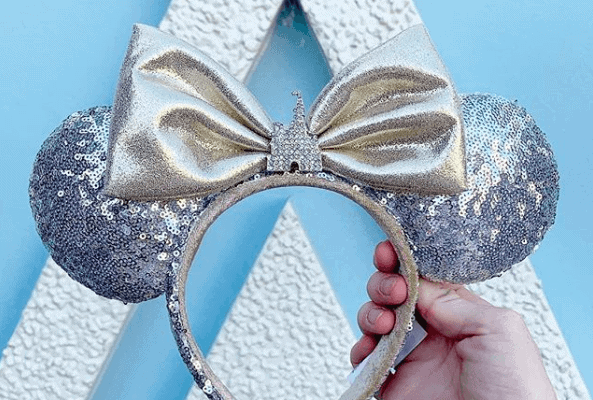 There’s a new set of ears to add to your Disney Parks shopping list! In January, Disney unveiled the sparkly new Castle Ears, which are available at Disneyland Resort, Walt Disney World, and now, shopDisney.

During a merchandise preview at Walt Disney World, Inside the Magic got a closer look at the pretty new design. The ears feature allover silver sequins, a bejeweled castle icon, and an iridescent gold bow. Whether you’re visiting Disneyland or the Magic Kingdom, the castle is one of the most beloved and recognizable icons in the park. We think these eye-catching new Castle Ears would make Cinderella and Sleeping Beauty proud.

say hello to ✨sparkly✨ new castle ears, coming soon to @disneyland and @waltdisneyworld resorts ? Link in bio to plan your next trip! #getyourearson

In addition to these castle-inspired ears, we’re also big fans of the Minnie Donut Ear Headband. Featuring two pink donut ears with sprinkles and a turquoise bow, these are a sweet treat for Disney fashionistas. Walt Disney World Annual Passholders got early access to the Minnie Donut Ear Headband during a V.I.PASSHOLDER pop-up event at Disney’s Hollywood Studios on January 31, so keep an eye out for other Passholder-exclusive events throughout the year to get your hands on new merchandise.

With this many adorable ear options, you’ll never run out of Disney style. Find the new Castle Ears at both Disneyland Resort and Walt Disney World as well as shopDisney!