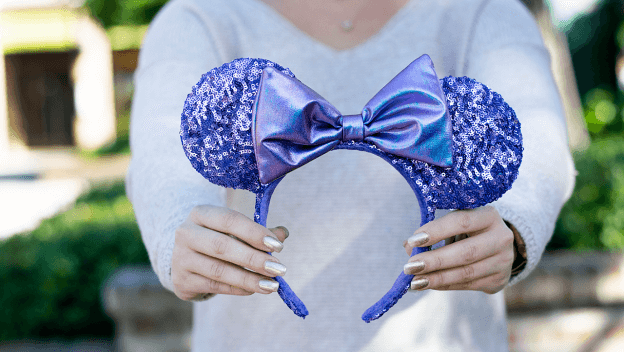 We’ve been eagerly waiting for these new Potion Purple Minnie Ears to debut at Disney Parks, and they finally arrive at Disney Springs and Downtown Disney on December 26, 2018!

The pretty purple ears were first spotted on Sarah Hyland and Jordan Fisher during the filming of “The Wonderful World of Disney: Magical Holiday Celebration,” which aired on ABC last month. Now, we can finally snag a pair of our own when the ears debut at World of Disney the day after Christmas.

The new Minnie ears feature a purple and blue iridescent padded bow on a sparkly purple sequined ears headband. This potion purple color may be the new fan-favorite shade of the season, and it’s already putting a spell on us. Disney’s other recent color crazes included rose gold and millennial pink items.

At Disney Springs, World of Disney opens at 10:00 AM every day. If you’re an Annual Passholder, you’ll get early access to these new ears on December 26 starting at 9:00 AM. These envy-inducing ears will also be available at select retail locations throughout Walt Disney World theme parks. To track them down, you can try using the Shop Disney Parks app, which shows you where items are in stock throughout Walt Disney World.

According to a comment on Disney Parks Blog from Darcy Clark, Disney Springs Marketing Manager, these ears will also be available at Downtown Disney’s World of Disney store in California starting on December 26. That store opens at 8:00 AM daily, and it’s not clear if Annual Passholders get early access at that location.

In their latest episode of “Inside Disney Parks,” Disney also revealed a new potion purple water bottle with a screen art silhouette of Fantasyland Castle and “Vacation Mode” text is on the way.

Will you be among the first to wear the new Potion Purple Minnie Ears? If so, be sure to tag your potion purple selfies with #DisneySprings for a chance to be featured on the Disney Springs Twitter and Instagram accounts in the New Year.