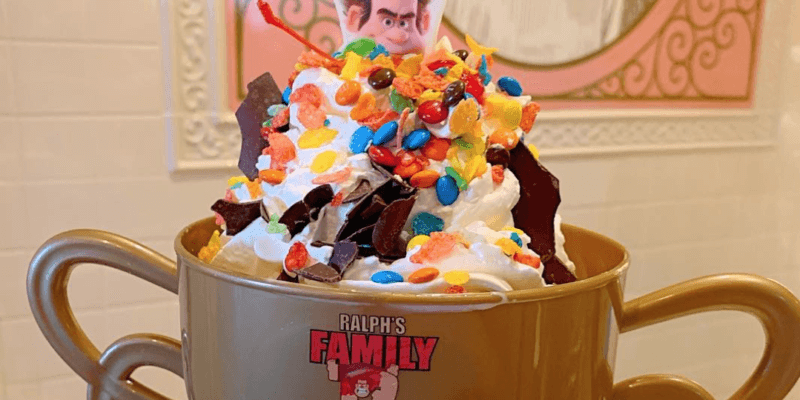 When most think of Sugar Rush, they think of the video game made famous from Disney’s”Wreck-It Ralph” film. However, Magic Kingdom has decided to take the term literally with their brand new limited-edition Vanellope’s Ice Cream Sundae.

Related: 5 treats you have to try at Vanellope’s Sweets and Treats on the Disney Cruise Line ship Disney Dream

The dessert is served in a championship souvenir plastic trophy, which can be taken home as a reward for finishing the towering sweet treat.

Fans of Beaches & Cream at Disney’s Beach Club Resort may be familiar with the Kitchen Sink, which closely resembles this new limited-edition sundae.

Back in November, it was reported by Variety that “Ralph Breaks the Internet” brought in $84.6 million over the five-day Thanksgiving holiday, making it the second-best Thanksgiving debut ever. $56 million of the film’s profits came from the weekend alone.

A sequel to Disney’s 2012 animated film “Wreck-It Ralph,” “Ralph Breaks the Internet” ranked right behind Disney’s “Frozen,” which premiered Thanksgiving weekend of 2013 with $93.6 million in its first five days. “Wreck-It Ralph” saw a much smaller premiere at only $49 million over its initial three days of release, but the film’s sequel brought the story of Ralph and Vanellope’s friendship to new heights, one of which includes this new tasty sweet.

If you’re still deciding on seeing “Ralph Breaks the Internet,” which is still in select theaters, be sure to take a look at our official review here.

Are you going to take on the challenge and get Vanellope’s Ice Cream Sundae at Magic Kingdom before it disappears? Let us know in the comments below!