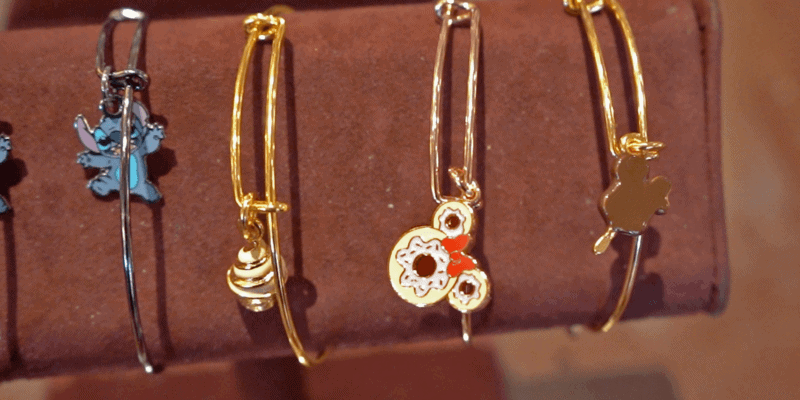 Themed after a new Disney merchandise trend–Disney Parks Snacks and one of Disney’s most famous extraterrestrials–Stitch, these new Alex and Ani bracelets are out of this world and will keep you hungry for more!

Starting with a snack that could cool off any park guest, even on the hottest day at the Disney Parks, is the Dole Whip, which is featured as one of the charms from this new collection. The bracelet consists of a gold band with a gold and yellow whipped charm replica of the famous treat, which does look good enough to eat.

Another snack featured in the collection includes a Minnie Mouse-themed donut icon, which consists of three donuts formed together with a cute red bow on top. If this bracelet got caught on your wrist, you might be tempted to bite it off, as it looks that good!

The last but certainly not least piece from the collection is a Mickey Mouse Ice Cream Bar, which consists of a yellow gold band bracelet with a miniaturized version of the classic sweet treat with one of its ears bitten off. Be warned, as tasty as this adorable charm looks, it’s not edible!

Also, the new Stitch bracelet by Alex and Ani boasts truly intergalactic fashion. The bracelet features a silver band with an adorable little version of the illegal extraterrestrial. Who’d ever think it’s possible to find a piece of jewelry this cute without leaving the galaxy?

The D-Lish Disney Snacks and Stitch Alex and Ani bracelets can all be found at the Emporium at Walt Disney World’s Magic Kingdom. Similarly, the bracelets are also available at select retail locations throughout the rest of the Walt Disney World theme parks and Disney Springs.

All of the merchandise seen in this article was found at the Emporium at Magic Kingdom and Mouse Gear at Epcot.

What are your thoughts on these new Alex and Ani bracelets? Let us know in the comments below!