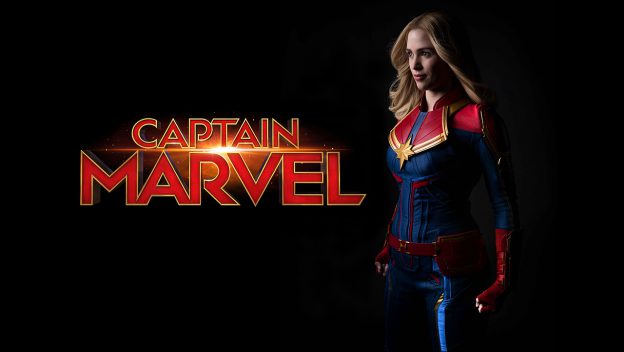 Captain Marvel lands on Disney Cruise Line and at Disney Parks in celebration of her new movie, which opens in theaters on March 8, 2019. Set in the mid-1990s, the film tells the story of Carol Danvers, a former U.S. Air Force fighter pilot and member of the elite Kree military team called Starforce. She returns to Earth with questions about her identity as the planet becomes caught in the center of an intergalactic conflict between two alien worlds.

You can watch the first trailer for “Captain Marvel” here, and here’s where you can see her in person in 2019:

“Beginning in March at Disney California Adventure park, Captain Marvel makes a triumphant arrival on an armored S.H.I.E.L.D. vehicle, escorted by a team of agents on her way to Hangar 12 in the northeast corner of Hollywood Land. As her jet fighter is being readied for a special mission, Captain Marvel lines up a gathering of recruits for a Heroic Encounter and inspires them to go Higher, Further, Faster,” says Disney.

Disneyland Paris revealed Captain Marvel will visit the park for the first time during Marvel Season of Super Heroes from March 23 to June 16, 2019. She’ll be joining guests for Heroic Encounters at the Blockbuster Café.

[BREAKING] To celebrate the release of her new movie, Captain Marvel will be landing at Disneyland Paris for the first time ever as part of Marvel Season of Super Heroes from March 23 to June 16, 2019! #MarvelSummer pic.twitter.com/z15LzwBpF3

Captain Marvel arrives at Shanghai Disneyland on March 8, appearing at the Pepsi E-Stage in Tomorrowland.

There’s lots of Marvel to look forward to in 2019, so be sure to look for Captain Marvel on Disney Magic sailings, at Disneyland Paris, Disney California Adventure, Shanghai Disneyland, and in theaters next year.

Comments Off on Captain Marvel to visit Disney Cruise Line, Disney Parks in 2019