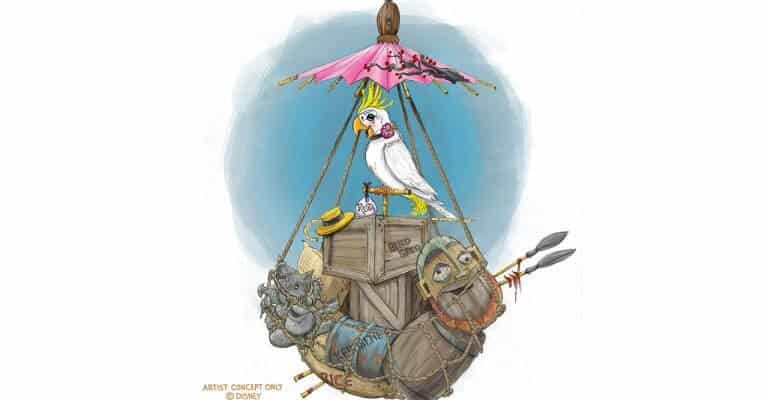 Rosita, one of the enchanting birds from Walt Disney’s Enchanted Tiki Room, is flying into the new Tropical Hideaway at Disneyland.

The friendly cockatoo who made her debut performing as a member of the bird mobile chorus in the Enchanted Tiki Room will be taking on a solo career at the new Tropical Hideaway. Much like a Jungle Cruise skipper, Rosita is full of one-liners, puns, and jokes to entertain each of the Tropical Hideaway guests as she perches near the loading dock at the river’s edge waiting for her boat to arrive.

Back in February, Disney announced the complete overhaul of the former Aladdin’s Oasis restaurant and meet-and-greet area, which is now under construction to become the Tropical Hideaway, the new outdoor eatery themed to Walt Disney’s Enchanted Tiki Room. In the early 2018 announcement, Disney wrote:

This one-of-a-kind destination will be a popular rest stop for Adventureland locals and weary explorers alike. Guests will be able to rub elbows with their favorite skippers in an exotic traders’ market, featuring all of the sights, sounds and flavors of the tropics.

Disneyland has slowly been revealing more details of the new Tropical Hideaway, including sneak peeks of the eatery’s new menu. The eatery will be an “exotic marketplace for discovering extraordinary eats from all over the world,” including varieties of bao (the stuffed steamed buns we know and love from Pandora: The World of Avatar in Walt Disney World), a chilled ramen salad, sweet pineapple lumpia (also served in Pandora), and more.

Back in August, Disney wrote of the Tropical Hideaway:

After picking up a snack or two, choose a spot on the open-air dock, soak in the sights of the Jungle River waterfront, sit back, and listen to the musical sounds of the tropics – all while experiencing delicious new tastes! After the sun goes down, flickering torch lights will illuminate the area, transforming The Tropical Hideaway into an enchanting nighttime venue.

Rosita is eager to meet all of the new visitors at the Tropical Hideaway, which Disney announced will open before the end of 2018. We’re still itching to discover what more will become of the new eatery and rest stop, but after seeing the newly rendered concept art of Rosita, we sure are just as excited as she is to visit.