In February, Disneyland Resort announced a complete overhaul to Aladdin’s Oasis– the restaurant adjacent to the Jungle Cruise attraction in Adventureland– to become The Tropical Hideaway; a new outdoor eatery themed around Walt Disney’s Enchanted Tiki Room, located on the opposite side of the space. And today, Disneyland has revealed some further details, including a target opening season and an assortment of exotic menu items.

According to an official release, The Tropical Hideaway “will serve as an exotic marketplace for discovering extraordinary eats from all corners of the world.” A list of tempting food options at this trader’s market highlights a steamed bao bun in three different varieties (Spiced Vegetable Bao, Kaffir Lime Chicken Bao, and Bulgogi Beef Bao). Other offerings include a chilled ramen salad, Sweet Pineapple Lumpia (“a spring roll filled with pineapple and sweet cream cheese”), and other tropical-inspired snacks. 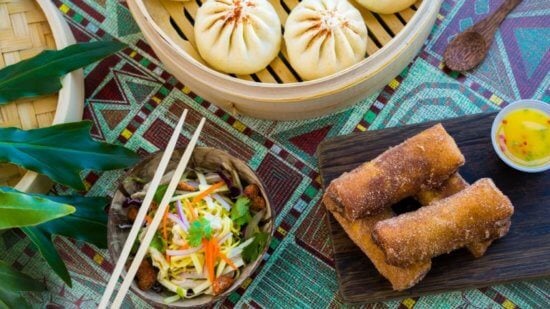 Disneyland’s appealing, newly-worded description of the Tropical Hideaway is as follows:

After picking up a snack or two, choose a spot on the open-air dock, soak in the sights of the Jungle River waterfront, sit back, and listen to the musical sounds of the tropics – all while experiencing delicious new tastes! After the sun goes down, flickering torch lights will illuminate the area, transforming The Tropical Hideaway into an enchanting nighttime venue.

And the biggest news of all announced today is that The Tropical Hideaway will open before the end of 2018, meaning it will likely become available to Guests by this coming holiday season!

As a fan of Walt Disney’s Enchanted Tiki Room, the world-famous Jungle Cruise, and Disneyland’s Adventureland in general, I have to say I am incredibly excited to have the opportunity to relax at The Tropical Hideaway, and I can easily see it becoming one of my favorite spots in the entire Park.