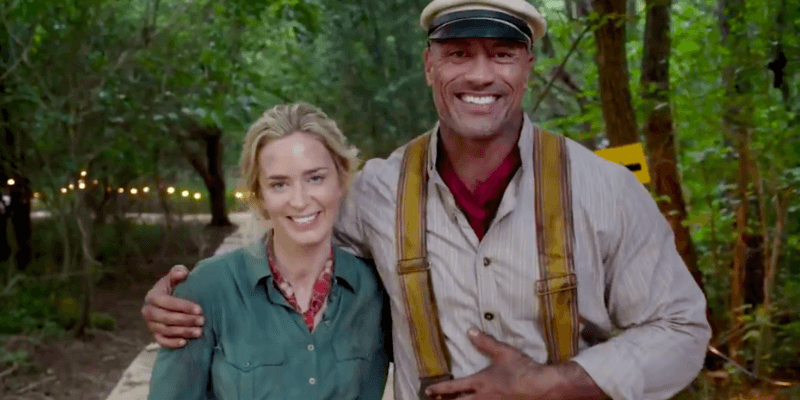 Disney’s classic Jungle Cruise attraction is set to be the latest classic theme park attraction to be transformed into a film and we already know it features an incredible cast. Two of the movie’s stars, Dwayne “The Rock” Johnson and Emily Blunt, were featured in a video released today by Walt Disney Studios, inviting us on the adventure of a lifetime.

The video starts with Blunt welcoming viewers to the set of “Jungle Cruise” before Johnson steps in with his trademark combination of humor and charm. The pair trades some jokes back and forth before explaining that the movie will be a love story.

WATCH – EMILY BLUNT AND DWAYNE “THE ROCK” JOHNSON WELCOME YOU TO THE SET OF “JUNGLE CRUISE”:

Emily Blunt and Dwayne @TheRock Johnson welcome you to the adventure of a lifetime! Disney’s @JungleCruise is now in production. In theaters October 2019. #JungleCruise pic.twitter.com/kKiasbWbT9

Johnson has been attached to the “Jungle Cruise” movie since early last year, and was joined by Blunt at the beginning of this year as well as Paul Giamatti back in May. Johnson officially signed his enormous contract for the movie a few months ago when production on the film began.

The Jungle Cruise is an original attraction at both Disneyland and Walt Disney World’s Magic Kingdom which takes guests on a journey into the many jungles of the world, showing off such marvels as gorillas, lions, snakes and of course, the world famous backside of water!

“Jungle Cruise” is being directed by Jaume Collet-Serra, who is primarily known for his work on horror movies like “Orphan” and “House of Wax.” The rest of the announced cast includes Jack Whitehall, Jesse Plemons, and Edgar Ramirez. In the film, a boat captain named Frank (Johnson) takes Lily Houghton (Blunt) and Whitehall’s character on a mission to find a tree believed to have healing powers. Along the way, a competing German expedition and wild animals disrupt the group’s plans. Giamatti will play a “crusty harbormaster.”

No official release date has been announced as of yet for Disney’s “Jungle Cruise.”

Are you looking forward to Disney’s “Jungle Cruise” movie? Let us know in the comments below!