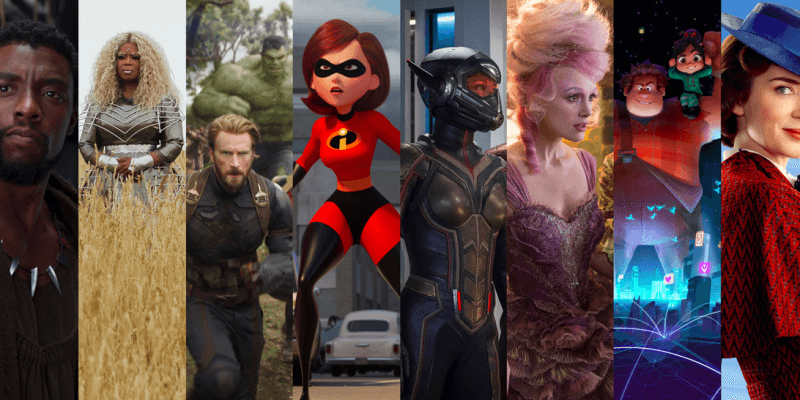 2018 is well underway and there is still so much to look forward to. Walt Disney Studios has a full, exciting slate of films set for this year, including classic characters, superheroes, highly anticipated sequels and much more!

Here are the 10 films from Walt Disney Studios set to hit theaters in 2018: Synopsis: After the death of his father, T’Challa returns home to the isolated, technologically advance African nation of Wakanda to take his rightful place as king. His mettle as both King and Black Panther is tested when an old foe reappears and draws him into a formidable conflict that puts the fate of Wakanda and the whole world in his hands.

A Wrinkle in Time – March 9 Synopsis: Meg Murry, a typical middle school student, is introduced to three celestial beings after the mysterious disappearance of her father. Joined by her younger brother and classmate, Meg embarks on a journey to worlds beyond their imagination where they must confront a powerful evil force.

Synopsis: The heroes of the Marvel Cinematic Universe join together to take on the greatest threat the world has ever seen. The Mad Titan Thanos wields an unthinkable weapon and unleashes a blitz of devastation on our heroes. Synopsis: Han Solo embarks on a series of dangerous escapades through a dark and dangerous criminal underworld which leads him to his future co-pilot Chewbacca, and long-time friend Lando Calrissian. Synopsis: The Incredibles are back in action, only now it’s Helen in the spotlight with Bob left at home to take care of the family. Everyone struggles with the transition until a new villain hatches a dangerous plot. Now the whole family has to work together.

Synopsis: Scott Lang faces the consequences of his decisions as both a superhero and a father until he is once again contacted by Hank Pym and Hope van Dyne. Now, he must team up with the Wasp on a dangerous new mission. Synopsis: The young boy who once loved to adventure into the Hundred Acre Wood has grown up and lost his way. Now, it’s up to his old friends to help him remember the loving and playful boy who is still inside.

The Nutcracker and the Four Realms – November 2 Synopsis: Clara ventures into a mysterious parallel world where she encounters all kinds of bizarre characters as she attempts to find her lost key. She, and her new friend Phillip, must brave the ominous fourth realm and confront the tyrant Mother Ginger to find her key and bring balance to the unstable world. Synopsis: Ralph and Vanellope have to venture into the world wide web to find a replacement part for Vanellope’s game, Sugar Rush. They soon learn they are in way over their heads and enlist the help of Yesss, the lead algorithm of the trend-making site “BuzzzTube.” Synopsis: Mary Poppins is back to help the next generation of the Banks family find the joy and wonder missing in their lives.

Which Disney movie are you most looking forward to in 2018? Let us know in the comments below!