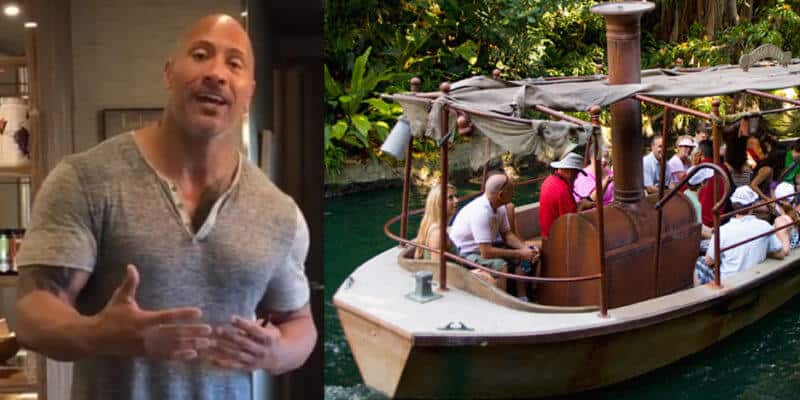 Over the past couple decades, Disney has made a number of movies based on its famous theme park attractions, to mixed results. But the successful ones (read: “”“Pirates of the Caribbean““”) have apparently been profitable enough to keep the train going, as the latest endeavor, “Jungle Cruise” starring Dwayne “The Rock” Johnson, Emily Blunt, and Paul Giamatti is steaming its way into production this week.

Yesterday morning on his incredibly popular Instagram account, The Rock shared a video of himself signing what he describes as “the biggest contract of [his] career” as he prepares to start shooting the film, based on the iconic opening-day attraction at the original Disneyland and other Disney parks around the world.

Lil’ nervous signing the biggest contract of my career for JUNGLE CRUISE. Think I had an out of body, “holy shit this is really happening” moment lol. 15yrs ago when I saw the first trailer for PIRATES OF THE CARIBBEAN I was blown away and so inspired. I was just starting my acting career at that time and thought man one day if I could make a movie based off an iconic and beloved Disney ride – that took audiences on that kind of vintage adventure and fun, it’d be a dream come true. So I vowed to put in the hard work…and 15yrs later here we are today. Promise to do my best to make ya proud, Walt. And for the love of all that’s holy, can my producing partners @flynnpictureco and @hhgarcia41 please get me a pen that has ink!? #DISNEY #JUNGLECRUISE #ContractSigning #DreamComeTrue #Imagination #MyNerves #INeedADrink

“About fifteen years ago, I dreamed of this moment. I saw the first trailer for ‘Pirates of the Caribbean’ and I thought, ‘Man, one day I would love to make a movie for Disney based off a legendary ride.’ And here were are today,” said Johnson right before putting pen to paper. Or attempting to, anyway, as his pen was out of ink. Is that good luck or bad luck?

We’ll find out when “Jungle Cruise” hits theaters sometime in the future, as no official release date for the movie has been revealed.