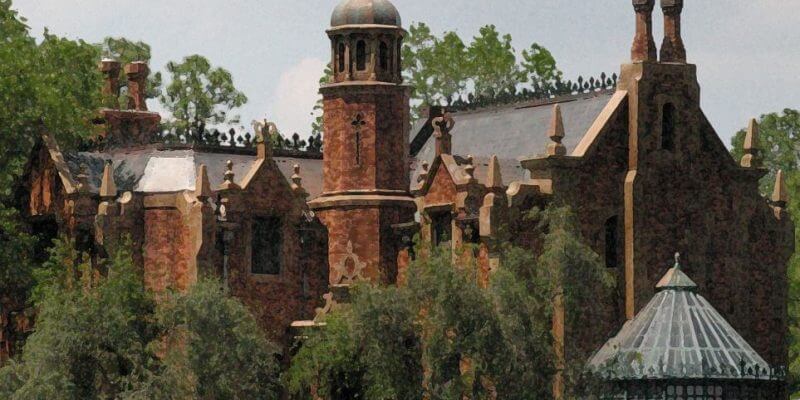 Halloween is quickly approaching and you bet Jack and the citizens of Halloween Town are busy preparing a frightfully fun festival. From jeering Jack-o-lanterns to grim grinning ghosts, fall’s finest is almost here! Each October many magical macabre manifestations materialize.

The mischievous make-over of Disneyland’s Haunted Mansion is one such annual must-see. Jack Skellington and his friends take over the dark manor and turn into a Haunted Mansion Holiday.  The experience is only found at Disneyland in California, but that does not mean Jack is absent elsewhere.

Listed below are 6 secret sightings of the Pumpkin King and pals that can be found at the Haunted Mansion at Walt Disney World.

WARNING: SPOILERS AHEAD (read at your own risk)

Most of the “Nightmare Before Christmas” items tucked away in the Liberty Square gothic mansion are not easy to spot from your Doombuggy, especially given the delightfully dark lighting (or absence thereof). Rest assured (peacefully we hope) these Burton-crafted characters are waiting there for your next tour of the Haunted Mansion.

Look closely at that changing portrait greeting you as you first enter the doors at the end of the queue. To the observant ocular orb, a small Jack Skellington can be spotted just above the smiling skull’s nose. There are actually two references to Pumpkin King in the Mansion’s library, though they are almost impossible to discern in the dimly lit room (a preferred paranormal pleasure).

The first is atop the stack of books on the table to the far end of the room. The top tome is none other than “The Nightmare Before Christmas,” eagerly awaiting its next reader. A second Skellington storybook seems to have fallen to the floor in front of the table. This second version of “The Nightmare Before Christmas” features a tall skeleton on the cover that is easily recognized as Jack himself. Constance may be the ghostly feature topping the list of attic apparitions, but there are several Nightmare nods as well.

The first of these hides on the shelf under the table to the right just as your Doombuggy enters the attic. Jack’s biggest fan, Sally, is there to greet guests as they arrive. Another edition of “The Nightmare Before Christmas” can be found on the floor of the attic. This one is to your left about halfway through your journey towards the murderous bride. Deep in the recesses of the last part of the right side of the attic are two more hidden Jacks. They are on the same knick-knack shelf. A Jack Skellington snow globe can almost be discerned hiding on the bottom shelf. At the top of the same piece of fiendish furniture is a Jack Skellington doll. While the Magic Kingdom’s Liberty Square Haunted Mansion may not ever see a full-fledged takeover by Jack Skellington and his friends, it is nice to know that the Pumpkin King is there, just out of view, all year long.