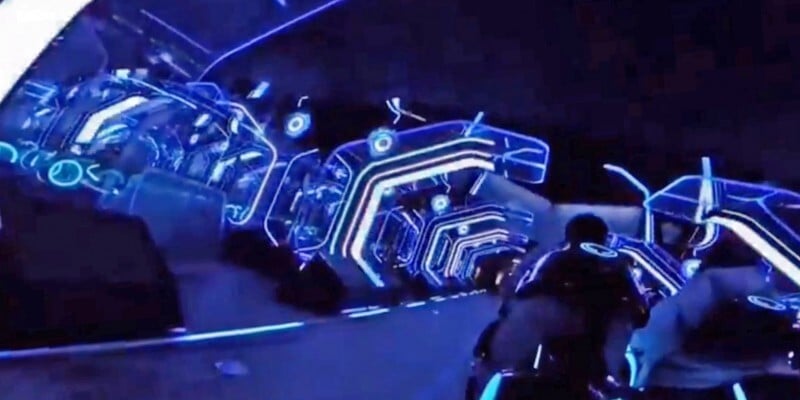 The Walt Disney Company is known throughout the world for its excellent theming and family friendly entertainment experiences.  With theme parks in America, France, Japan and China, millions have had the opportunity to enjoy a variety of amazing attractions.

These rides range from wild to mild.  Occasionally there’s an attraction that takes thrills to a new level.  Some are even fantastically frightening.  We’ve gathered eight exceptional examples of the exciting experiences for you to enjoy. A little bit goes a long way.  What the imagineers did with this Extra-TERRORestrial attraction was just pure brilliance.  The use of suggestive “imagery” in almost complete darkness via binaural audio, hot air, moving seats and harnesses and sprays of water make this one of the best horror themed attractions ever.

While we think the original 1969 Haunted Mansion attraction in California is un-boo-lievably creepy cool.  The unique story and scenes of Phantom Manor at Disneyland Paris is where the real chills come from.  Listen . . . (and watch)

3. Pirates of the Caribbean: Battle for the Shrunken Treasure (Shanghai)

Another classic adventure found at many of Disney’s theme parks, Pirates of the Caribbean has been given over the top treatment for its newest incarnation in China.

Bonus points to Disneyland Paris for the updated scenes with Captain Barbossa and the beloved Red Head.

There’s something about rocketing away from a dead stop that just gets the adrenaline going.  Add that excitement to an indoor setting and throw in some great Aerosmith tunes and the thrill is more than note-worthy.

Already a winner for being the first ride to feature Disney’s sci-fi sensation “Tron”, this eagerly anticipated Tron Lightcycle Power Run finally made its debut in the company’s newest theme park.

The original and unique (it’s the only incarnation where the ride vehicle travels across the attraction) Hollywood Tower Hotel is ever ready for new guests to check in.  More like drop in, as the elevator has its ups and downs.  With a haunting story AND a thrill ride in one eerie experience Tower of Terror’s original version can only be found at Disney’s Hollywood Studios in Florida.

While Disneyland in Anaheim materializes with a ghost galaxy overlay every fall, it’s the cannon-like lift of Paris’ version of Space Mountain that rockets above the rest.

Located in the heart of Animal Kingdom in Florida, Expedition Everest takes guests to the top of the iconic mountain and in the path of track wrecking Yeti.

For those wanting a bit more roar in their ride, these eight exciting thrills and chills are ready to ratchet up the heart rate.  And now with Star Wars themed adventures coming to Disneyland in California and Walt Disney World in Florida, there’s bound to be even more excitement very soon.

How many of these thrills have you experienced?  Which is your favorite?  Coast on over to the comments section and tell your tale.