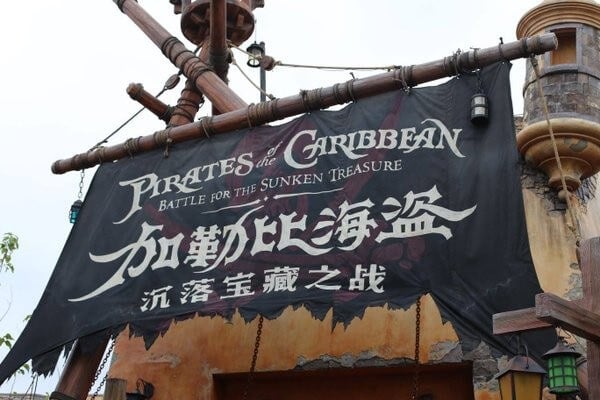 Shanghai Disneyland will not open its huge gates for the general public until June 16th but select guests and cast members are currently getting a chance to test out the park and its fantastic attractions. Treasure Cove is one of the lands in Shanghai Disneyland and its headlining attraction is a new version of the classic Pirates of the Caribbean ride.

In the all-new Pirates of the Caribbean: Battle for the Sunken Treasure ride, you will set sail for some seafaring fun that takes you on, over and under the deep blue in search of Davy Jones’ sunken plunder—all while crossing paths with pirates, mermaids and even the savage Kraken.

Landlubbers leave from the Royal Navy’s former fortress and embark on a course that passes through the mysterious Voodoo Alley and Jack’s own secret sanctuary—the Caves of Misfortune—before hitting the briny depths. This is a Pirates of the Caribbean ride like you have never seen before! Thanks to @mattfinnemore for video and pictures. Check out his YouTube channel for even more Shanghai Disneyland coverage HERE. Also thanks to @DisneylandDrive for the additional pictures.