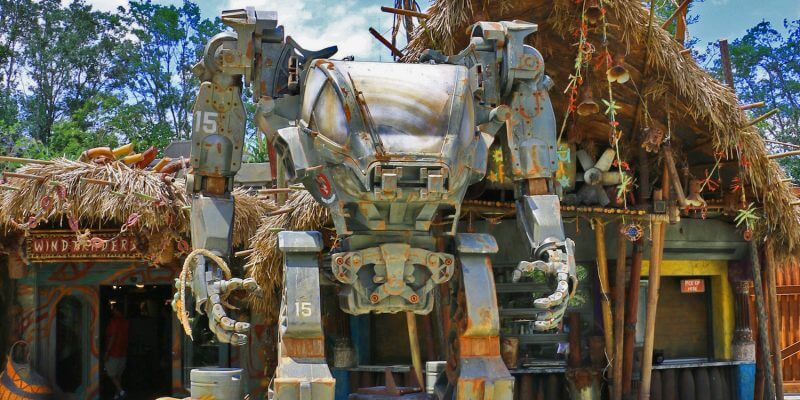 For decades, marketing professionals have searched for just the right words to create excitement for the latest and greatest forms of entertainment. For a while in the theme park world, superlatives like tallest, fastest, longest, and wildest, were frequently thrown around as companies battled to create the most – whatever – of its kind. Then came the interactive craze, in which every ride, queue, show, or other attraction needed colorful, blinking buttons or laser guns in order to be considered cutting edge.

Today, we have entered the era of “immersive” design, the subject for the final part of our Unearthing Pandora series. In Part One, we offered Disney’s reasons for building a new themed land around a largely forgotten film. Part Two centered on the beauty and feeling of the Disney’s Animal Kingdom addition.

Now we explore just what makes Pandora – The World of Avatar truly worthy of the word “immersive.”

This latest buzzword has been used (and over-used) for the last decade. According to Wikipedia, it was coined in this context by Alex McDowell, production designer for some of Hollywood’s biggest and most ambitious films including The Lawnmower Man, The Crow, Fight Club, Minority Report, and Charlie and the Chocolate Factory. But more recently, McDowell founded the World Building Institute at USC, which as its name suggests focuses on how new ways designing narratives can be integrated into elaborate place-making endeavors.

It seems we can thank McDowell for the beginning of the “immersive” buzzword that has since been repeatedly scoffed at for being nonsense and having no real meaning.

So when Disney markets that Pandora “immerses guests in a mystical world” featuring an “immersive new adventure,” there’s a healthy dose of skepticism that goes along with those bold statements. But when Imagineers like executive creative director Joe Rohde are involved, you can be sure they don’t use the buzz-worthy term lightly.

When I directly asked Rohde about the overuse of “immersive,” I couldn’t even finish my question before he shrugged it off with a dismissive, “Yeah, yeah, yeah.” But he quickly followed his obvious displeasure of the often-overreaching use of the word by defining how he personally thinks of it.

“There’s a way in which immersion is a very primal concept, something that happens to us regardless, even if a good storyteller is just telling you a story with his mouth,” explained Rohde, during an interview following a recent preview tour of Pandora. “If that story is well told, you’re gone. You’re in it.”

But Disney’s theme park designers definitely aren’t just verbal storytellers. They embody the old filmmaker adage: “Show, don’t tell.” There are layers upon layers of story-inspired design that contribute to their creations.

“The first level of immersion is simply to make sure that story is well structured. Make sure the story works. Then you can start to build up.”

Imagineer Mark LeVine, Lead Writer on Pandora, built upon Rohde’s notion of how to start a story. “Flight of Passage builds very deliberately. You see these flying creatures called — you don’t even know what they’re called yet. You see them in totems. You see them in the cave. You start to go into an abandoned facility. We wanted each spot to be a surprise, to a degree. ‘What is around the next corner? I’m in a cave. I’m in an old facility. Oh there are scientists here. What are they doing? Oh, they’re studying that animal I saw in the cave, the banshee. So we build the story each piece at a time – there’s a banshee, people ride on its back, they’re called ‘avatars,’ the way you can get to [a banshee] is through avatars, you link to them. We have to go one step at a time.”

And indeed Flight of Passage is one of the most fantastically, wholly immersive experiences Disney has created, largely thanks to the storytelling layers that unfold around every corner of its lengthy queue. But guests shouldn’t find themselves agitated while waiting in line to ride because the environments around them are already part of the experience.

WATCH – A WALK THROUGH FLIGHT OF PASSAGE’S QUEUE:

Guests who pay attention to their surroundings – and it’s hard no to when encountering the jaw-dropping visuals in Flight of Passage’s laboratory queue scene, for example – will find an almost endless array of details through which they can become fully absorbed into this fictitious world and the story it is based on.

“There’s a thing about detail,” began Rohde, offering an important aside to help define what makes an attraction ‘immersive’ to him. “We all are familiar, if we know theme parks, with the concept of a berm – the outer wall that surrounds us and keeps us from seeing out of the world and seeing contradiction on the outside.”

Indeed, the beginning of the theme park berm dates back to the original Disneyland Park, as Walt himself began adding elements to the park’s extremities to block guests from seeing outside, starting with the Disneyland Railroad’s Grand Canyon Diorama in 1958, ever-evolving since as the park continued to expand.

“Detail does not exist for no reason,” continued Rohde. “Detail exists only, in a story, for reasons and part of the job of detail is to provide the ‘inner berm,’ so no matter how closely you look, no matter how much you look down, you will remain inside this world, because the detail is the inner berm.”

In the case of Pandora, this ‘inner berm’ can be seen just about everywhere. From slash marks on logs made by Viperwolves and Na’vi footprints embedded in bioluminescent pathways beneath guests’ feet to cave drawings in the Flight of Passage queue that begin to tell the story of Pandora’s banshees to hand-woven thatching above guests’ heads in the Na’vi River Journey queue that forms a map of sorts for Pandora’s river – the details are what make each area’s design rich.

“If you do that properly, people are contained – immersed – inside of the world,” concluded Rohde. “Beyond that, what you choose do in terms of interactive structure, game structure, theatrical structure. That’s all layers above the primal element that creates immersion.”

All of these layers enable us to accurately describe Pandora as “immersive,” without using the word just for the lack of a better term. Pandora – The World of Avatar, unto itself, is buzz-worthy.

But it’s still important to note that not all “immersive” experiences are nearly created equal. And Joe Rohde has a theory as where this fascination of everything “immersive” came from – and where it will take designers in the future.

“I do believe we’ve entered an era – and I think it may be because of gaming – where the expectation is no longer the expectation of a proscenium, but rather the expectation of a dome; the expectation that the story does surround me. If I turn my head, I’m still in the story. And that, I think, is where we are now arriving, in a world of world creation where you can enter and you’re free to look wherever you please and we will sustain you and keep you inside of a story, because it surrounds you. It’s above you in this case.”

Though this was the final installment of our Unearthing Pandora feature series, we’ve only just begun to cover the new Walt Disney World land. Tomorrow,
we’ll be heading back into Pandora – The World of Avatar for another sneak peek (follow along on Twitter), just one day before Walt Disney World Annual Passholders have their first opportunity to get immersed in the world. And we’ll also be there as Disney officially grand opens Pandora with a lavish event at the end of May.

Stick with ITM in the coming weeks as we continue to reveal all the tiniest details and the most interesting stories about how The World of Avatar came to be.