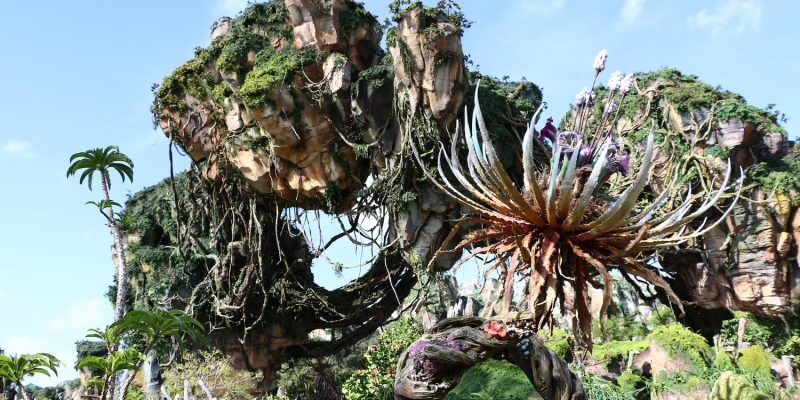 Whether you connect with James Cameron’s “Avatar” movie franchise or not, be ready for Disney’s Pandora to blow you away.

Six years since its announcement, Pandora – The World of Avatar will finally open in less than a month to become the newest land in Disney’s Animal Kingdom theme park in Orlando, Florida. In that land, guests will unravel the story of a war-torn planet healing and restoring a healthy relationship between its vast range of animal species and the world they inhabit.

Today, Walt Disney World granted us access to the nearly-completed area in an early preview, revealing a breathtaking destination of floating mountains, cascading waterfalls, colorful vegetation and wildlife. It is the feast for the eyes and ears that all have hoped it to be. The Valley of Mo’ara is the part of Cameron’s fictious Pandora world that Disney guests step into. This geographical region of the distant realm was created for Walt Disney World as a place in which peace now exists, a generation after the events of any current or future “Avatar” film.

WATCH – WALK THROUGH THE VALLEY OF MO’ARA: There is so much to look at inside Pandora that a person could spend hours on end appreciating the detail; nevertheless, it remains that the massive realistic (yet artificial) mountain range is the first spectacle that catches your eyes. You simply can’t avoid it – or look away.

The majesty of mountains is nothing new to us – whether made by Mother Nature or Disney’s Imagineers – but the sight of floating crags and voluminous waterfalls spilling from their crevices definitely presents an entirely new level of craftsmanship. Disney has created the illusion of depth with its rock work. As you take in the backdrop of Pandora, a few of the floating boulders feel as if they are miles away. It’s by design, as rockwork designer Zsolt Hormay explained during our tour today. Disney uses the tried-and-true technique of forced perspective to make tiny rocks look like they are massive ones far in the distance. This illusion is enhanced by a clever trick in which real giant waterfalls are juxtaposed with tinier trickles of water further away. In turn, that is enhanced by fake “waterfalls” in the far distance to complete the entirely believable effect. It is awe-inspiring – but the real sense of grandeur truly washes over you when you walk the paths beneath these massive floating boulders. Give in to the temptation to momentarily swallow the fantasy of it and you’ll find the emotional impact can be quite powerful. When you manage to move past these stunning summits, Pandora’s unusual ground vegetation commands attention. The “alien” plant life is as captivating as its surrounding topography.

Trees that look like blue cotton puffs and shrubs that resemble anemone most definitely appear otherworldly. Just about everything seems curious – perhaps something out of an alien version of Wonderland. Show Producer and Walt Disney Imagineer Matt Beiler noted how the Disney-built fictional flora of Pandora blends seamlessly with existing Earth plants to offer a familiar, relatable feel to the areas. How and where the plants have “grown” further story of Pandora’s perilous past, a blend of concrete, metal, and nature where nature is now winning the area back. A stark contrast to the area’s beauty, scattered throughout Pandora are the remnants of war – details that begin to deepen the land’s story.

A dilapidated military base is still present in the area, serving as a constant reminder that life was not always peaceful here. It’s as if you can still feel a trace of pain for Pandora in the wreckage; however, when you see the overgrowth of vegetation on the beaten buildings and broken aircraft, it becomes obvious that nature has decided she will take her power back. And herein lie the layers to Pandora’s story as well as the emphasis of a symbiotic relationship between land and life. It’s not just the land that has begun to heal. The native people have too, and their strength is shown in the celebration of their culture. Woven artwork hangs from trees, large instruments sit about to play (as demonstrated by Imagineering’s Audio Media Designer Stephen Fortunato below) and giant totems dedicated to their magical species loom large. You don’t ever see the Na’vi actually walking about (unfortunately), but their spirit is ever-present, living in balance with their home land. Closer inspection of signage and other details enable visitors to learn that the Na’vi have welcomed a touring company, Alpha Centauri Expeditions (ACE), to serve as a liaison between Pandora and the human race. That’s how we – average, everyday theme park goers – have managed to find our way here.

ACE’s goal is to show hospitality to visiting humans and provide a basic education of the planet and its people. They have taken the abandoned military base and repurposed it for tourism; therefore, bunkers are now retail shops, storage units are now restroom facilities, and the mess hall currently operates as fast, casual dining. It’s a bit of a story stretch Disney has used to incorporate the real-world necessities into the immersive tale they are spinning. Additionally there is a population of “expats” – humans who have transplanted to Pandora as a permanent residents. (Yep, you guessed it, those are Disney’s Cast Members.) They are said to love the planet as if it is their native homeland and they make a small living while leaving an even smaller carbon footprint. The goal is to ensure that guests never get a sense of the “outside” world while in Pandora. So these Cast Members are actually said to be living a somewhat symbiotic relationship with their place of employment. Or, as the story goes, we see a land that is flourishing under the care of its inhabitants and a people benefitting from the resources the land provides. It’s a clever twist to help guests suspend disbelief and stay fully immersed throughout their visit.

But these ‘symbiotic’ relationships are not exclusively visible. They can be heard in sounds beyond the bustling center of ACE’s activity. Distant noises of a rich wildlife drive home the point that there are active relationships everywhere. Sounds of different species, both intriguing and haunting, seem to call to one another from the bushes. The faint rhythm of drums and the occasional signal of a horn also add to the notion that communication between creatures is happening all around. It’s life, existing in a delicate balance, and thriving without interference. It’s all part of the place-making that Disney is so good at, to bring a genuine feeling that life in this world stretches far beyond its visible boundaries.

In the evenings, Pandora lights up majestically in bioluminescent glory to reveal an entirely different type of experience. Neon colors light the pathways and glowing flora illuminate the area in such a way that can’t be fully appreciated until the sun sets.

The land of Pandora has the uncanny ability to seem comfortingly familiar while remaining fascinatingly strange. It fits seamlessly into a park that was built on themes of conservation and symbiosis and feels like the puzzle piece that has been missing from Disney’s Animal Kingdom since it opened – the portion that unleashes a little fantasy onto the reality. It’s the bit that brings nightlife to a park that has largely been restrained within daytime hours for nearly two decades. And it is an area that speaks the park’s timeless messages through foreign tongues and captivating beauty.

Pandora’s true scope and scale cannot be appreciated without being there in person. No photos or video will do it justice. Find out for yourself when Walt Disney World officially opens Pandora – The World of Avatar to the public on May 27.