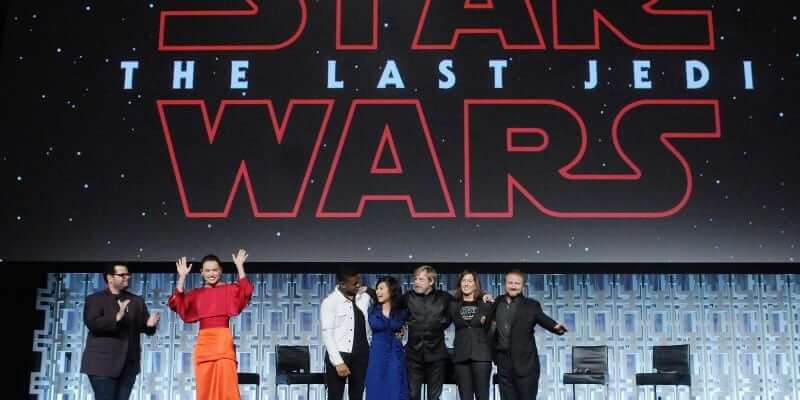 While the first day of this year’s Star Wars Celebration official fan convention in Orlando, Florida was all about looking back at the Star Wars franchise’s four-decade history, the second day was about looking forward.

The morning began with another huge, highly-anticipated and packed-to-the-gills panel— this time for the upcoming “Star Wars Episode VIII: The Last Jedi.” Fans once again lined up and camped out overnight to be in the same room as cast members Daisy Ridley, John Boyega, and Mark Hamill as they discussed the making of the film with director Rian Johnson and Lucasfilm president Kathleen Kennedy.

The energy in the room was electric as we neared the panel’s end and the group revealed the teaser poster for “The Last Jedi” (which we all received walking out of the hall afterward) immediately followed by the movie’s very first trailer. I was present for the reveal of the “Chewie, we’re home” trailer during Star Wars Celebration 2015, and it was an honor to be there again this year. The excitement was palpable, and the emotions ran high as we finally got a real taste of what we can expect from “The Last Jedi” come December.

After the day’s headliner panel we spent some time processing, discussing, and writing about that trailer… and of course fetching a poster tube to store the already highly-sought-after “The Last Jedi” artwork we had walked away with. Then it was time for the “Rogue One: A Star Wars Story” behind the scenes panel, which got off to a late start but contained some fascinating tidbits and intriguing backstage images. Up next was Mark Hamill’s endlessly moving tribute to his dearly departed costar Carrie Fisher. During his hour on stage, Hamill was refreshingly honest about his need to move past Fisher’s death with the help of an audience filled with the Star Wars devotees that Carrie loved so dearly. Most of the panel was spent with Mark simply sitting in a cushioned chair recounting often-hilarious stories about his time with the inimitable Princess Leia. It was all entrancing, touching stuff.


The day closed out with a trip to Disney’s Hollywood Studios park for the special Star Wars Galactic Nights event, scheduled in conjunction with Star Wars Celebration weekend. It was a real treat to see several characters make their first theme park appearances, ride the Rock n’ Roller Coaster with a fitting Star Wars soundtrack, and to experience the projection/fireworks show “Star Wars: A Galactic Spectacular” to mark the halfway point of this triumphant four-day affair.