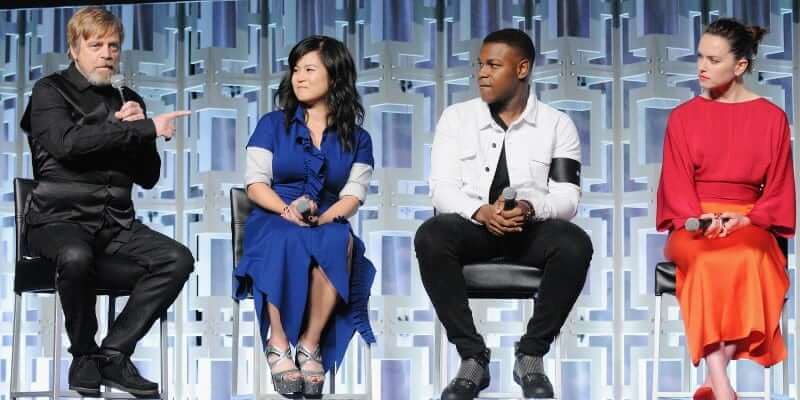 This morning during the second day of Star Wars Celebration 2017 in Orlando, the cast of “Star Wars: The Last Jedi” (including Daisy Ridley as Rey, John Boyega as Finn, and Mark Hamill as Luke Skywalker) assembled on the Galaxy Stage with director Rian Johnson in the Orange County Convention Center to talk about the making of the upcoming Star Wars Episode VIII.


Panel host and moderator Josh Gad (“Frozen”) discussed his love of “Star Wars growing up, and how he would watch the original trilogy over and over again on VHS. “For you millennials in the crowd, that’s what WALL-E uses to watch movies,” Gad quipped.

Lucasfilm president Kathleen Kennedy then brought out Rian Johnson and complimented him on “doing a really cool thing last night” when Johnson spent four hours greeting fans who had camped out in line overnight to attend the panel.

Johnson shared a series of new behind-the-scenes photos from the making of “The Last Jedi,” and discussed the process of making the film in London and Ireland. He also payed tribute (as everyone on stage at this year’s Celebration is making an effort to do) to the departed Carrie Fisher, with whom he said he bonded on set as a fellow writer. “The Last Jedi” star Daisy Ridley received thunderous applause from the Galaxy Stage crowd when she entered the auditorium. Josh Gad once again attempted to pester her for spoilers, but the only thing she let drop was that Rey would find Luke to be very different from her expectations of the mythic Jedi Master.

John Boyega also received a very warm welcome, and proceeded to talk about how well he and Ridley got along while filming, and revealed that Finn is still very much trying to find his way, still hesitant to fully commit to the Resistance.

Mark Hamill also returned to the Galaxy Stage (after chatting with George Lucas at yesterday’s 40th anniversary panel) and attempted to answer Josh Gad’s probing questions. “Does Luke finally get to speak in this film?” Gad asked. Hamill replied, “I don’t remember.” He also joked about he and Rian Johnson were both terrified to anchor Episode VIII. “One of the reasons I loved Rogue One and the prequels so much is that I wasn’t in them.”

The group also welcomed the famous round droid BB-8 onto the stage, as well as new cast member Kelly Marie Tran (from the TV series “About a Boy”) who will be playing a Resistance maintenance worker named Rose.

“Star Wars: The Last Jedi” will be released into theaters on Friday, December 15th. Stay tuned to Inside the Magic over the weekend for more from Star Wars Celebration.