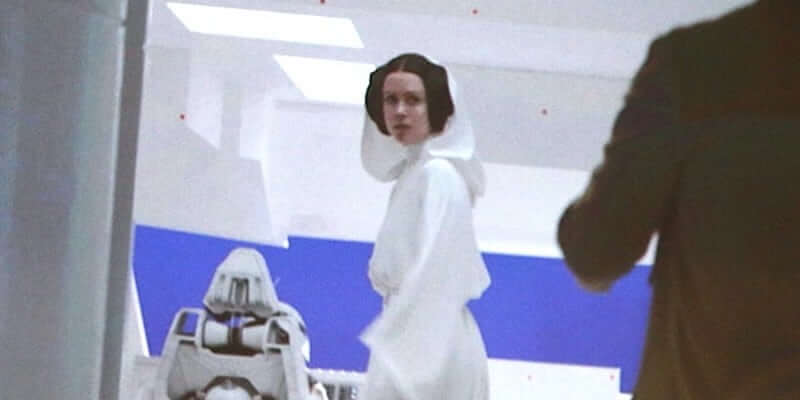 From virtual sets to giant LED screens, technology was a main part of shooting “Rogue One: A Star Wars Story” as revealed during a “Making of” panel at Star Wars Celebration 2017.

On hand were Executive Producer and Visual Effects Supervisor John Knoll and Production Designer Doug Chiang to show off never before seen clips from how iconic scenes and settings from “Rogue One” were created.

Knoll impressed the crowd of fans immediately as the panel begin with CG rendered walkthroughs of virtual sets created for the film. These sets were built entirely in the computer to help decide what physical sets would be necessary to build versus simply shooting against a blue screen. Many original sets from “A New Hope” were digitally recreated and while some where left on the digital cutting room floor, they are no less impressive. In some cases, partial physical sets were built to shoot the actors within to allow natural lighting to be captured on the actors, making it easier to composite the into the virtual sets in post-production. Their general rule was to build at least 30% of a scene in real life, making it easier to trick the eye when filling in the rest of the frame with digital details. Equally impressive was the filmmakers’ use of giant LED screens surrounding actors, set pieces, and vehicles to simulate land and space travel – in realtime.

Actors would sit inside an X-Wing cockpit, for example, with wrap-around screens showing pre-rendered and realtime effects that they could react to. The cockpit was placed on a gimbal, allowing it to bounce around in time with the visuals. Effects artists were standing by with iPads to trigger explosions as well as red and green laser blasts for actors to play off of. It was almost like a theme park ride that all the crew members wanted to try out – but weren’t allowed to. Some actors didn’t want to leave, having far too much fun. (Who can blame them?) Likewise, LED screens were used to show backgrounds and practical computer graphics that the script called for in the Death Star and outside various interstellar ship moments. Many of these shots required little to no additional post-production work, often reading on camera as the real thing. “Rogue One” director Gareth Edwards was equipped by the effects team with a small rig he could hold in his hands to manually maneuver a virtual camera across vast space battle scenes, allowing him to translate his gritty “documentary” style of filmmaking to the purely CG rendered scenes.

New tools that will be refined and used for future films allowed rough 3D CG sets to be created with ease before physical sets were built, to allow the director to virtually navigate through the sets before construction began. Beyond the obvious and much-publicized use of CG to recreate actors’ performances, the visual effects of “Rogue One” tend to hide in plain sight – which is exactly the sign of a job well done for this team.