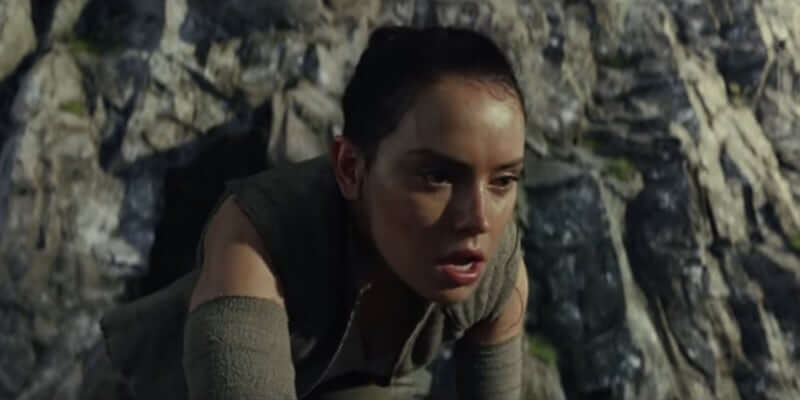 As you’re more than likely already aware, the very first trailer for “Star Wars: The Last Jedi” made its debut this morning at Star Wars Celebration 2017 in Orlando, Florida. The event was live-streamed around the world and the trailer quickly made its way onto the internet via the official Star Wars YouTube page.

If you’re anything like me, you’ve already watched it several times, but let’s go ahead and take another look at the trailer with an eye for up-close analysis and go shot for shot as we try to piece together what might be going on in “The Last Jedi.”

Shot #1 – We open on a rocky surface. At first glance, it looks like it might be a desolate planetary landscape or the face of a meteor. Suddenly, in a jump scare mirroring Finn’s entrance into the first “The Force Awakens” teaser, a hand collapses down onto the rock. We pan up to find Rey (Daisy Ridley) gasping–most likely exhausted from her training.

Shot #2 – A sweeping shot over the ocean of the planet Ahch-To, as we approach the island where Luke has been living in isolation.

Shot #4 – A rear shot of Rey as she stands in a cove and looks out over the crashing waves. Luke: “Now, reach out.”

Shot #5 – Rey’s hand is on a rocky surface again, but this time the pebbles surrounding her fingers lift off the ground as she is most likely learning to control the Force.

Shot #6 – Rear shot of General Leia Organa as she studies a holographic map of the galaxy. Rey, in voice-over: “Light.”

Shot #7 – Darth Vader’s burned helmet, now shattered on the matte black floor of what is presumably a First Order ship. Is Kylo Ren struggling with his decision to kill his own father? Is he still drawn to the Light side of the Force, and frustrated by that temptation? Rey: “Darkness.”

Shot #8 – A pedestal or shelf set into the root system of an ancient tree, bathed in a faint beam of light, with several old and tattered books lined up vertically. Could these be the Journals of the Whills?

Shot #9 – A close-up of Rey’s gloved hand, touching the cover of a book with the Jedi Order insignia on the cover. Rey: “A balance.”

Shot #10 – Rey trains with a green-bladed lightsaber (possibly Luke’s second one from “Return of the Jedi”) on the cliffs of Ahch-To as a robed Luke looks on from the hillside. Luke: “It’s so much bigger.” Does he mean there is more to the Force than just the Light Side vs. the Dark Side, good vs. evil?

Shot #11 – Rear shot behind a series of derelict ships as they skitter across a cracked desert landscape, leaving behind trails of red mist as they grind against the ground. At first glance, the ships resemble Naboo Starfighters, although the shape of the wings isn’t quite the same. The ships race toward what appears to be some sort of Imperial (or First Order) walkers in the distant background.

Shot #12 – Side shot of the same action sequence. These ships definitely aren’t Naboo Starfighters, but they look kind of like a cross between them and podracers.

Shot #13 – A close-up of Finn’s (John Boyega) face as we tilt down to reveal he is recovering from his injuries in a white medical pod. Lights and a digital readout in Aurebesh monitor his condition.

Shot #14 – BB-8 and Poe Dameron run hurriedly down a hallway as sparks fly around them. Other Resistance soldiers race in the opposite direction.

Shot #15 – Poe and BB-8 reach a hangar, where an explosion goes off right behind an X-Wing Fighter, enveloping the ship. Poe shields himself from and staggers backward away from the blast.

Shot #16 – A First Order TIE Fighter explodes just before the Millennium Falcon flies into the frame against a blue sky with white clouds in the distance. Several more TIE Fighters pursue the Falcon as well, firing their lasers.

Shot #17 – Rey, looking angry, runs with mountains in the background. She is notably holding Luke’s first (blue) lightsaber in this shot. Luke: “I only know one truth.”

Shot #18 – A close-up of Kylo Ren (Adam Driver) as he points his red crossguard lightsaber almost directly into the camera as flames rage behind him. He looks furious, as always.

Shot #19 – Rear shot of a hooded figure– probably Luke– stand next to R2-D2 as a building burns in the background– most likely a Jedi temple. The person drops to his knees.

Shot #20 – Captain Phasma (Gwendoline Christie) marches through the fire flanked by a battalion of First Order Stormtroopers. In the foreground are debris and ruins from the burned building.

Shot #21 – A space battle. A whole bunch of ships, including X-Wings, what looks like A-Wings, and some large new torpedo-shaped ships with gull wings. Lasers fire everywhere against the backdrop of a bluish-green planet.

Shot #22 – Another shot from the same space battle. A TIE Fighter explodes, shot down by an X-Wing that roars past the camera.

Cut to black. Luke “It’s time for the Jedi…”

Shot #23 – Mostly black wide shot peering outward through the opening of a cave on Ahch-To, with Luke standing in the entrance looking back toward the camera. Luke: “… to end.”

So what does it all mean? Well, for one thing, it’s confirmation to the many theories (based on the film’s title) that Luke wants to dissolve the Jedi Order, something hinted at by Daisy Ridley in “The Last Jedi” panel when she said Rey doesn’t get exactly what she was expecting from Luke when she arrives to begin her training.

What are your thoughts on the new “Star Wars: The Last Jedi” trailer and poster? Let us know in the comments below and stay tuned to Inside the Magic over the weekend for more coverage from Star Wars Celebration 2017! “Star Wars: The Last Jedi” will be released in theaters on Friday, December 15th.